England hold on for a Grand Slam finish in France

England's women's rugby team won the Grand Slam in nailbiting fashion as they edged out France 11-10 thanks to Katy McLean's (pictured) second-half penalty. 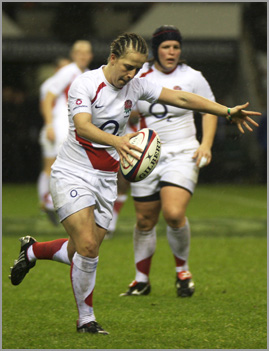 Amy Turners first-half try gave them a 5-3 halftime advantage while the home side had Claire Canal sent off on the half-hour mark.

Despite their numerical advantage, England conceded a second-half try to Cline Allainmat that put France ahead 10-8 before McLean kicked the final points of the game with a 64th minute penalty.

The drama did not end there though and, in injury time, French kicker Aurlie Bailons 45-metre penalty fell just short of the posts as England held out to record a record-breaking fifth consecutive Championship title.

While England had been in imperious form heading into the match in Rennes, conceding just five points in four games, they faced their toughest test against a French side roared on by a partisan home crowd.

Running rugby was never going to be the order of the day in appalling conditions and for once England struggled to turn their superiority into points.

McLean missed one drop goal opportunity on eight minutes before they fashioned the games opening points with a terrific team try.

The forwards drove their way down the pitch before the ball was fed out to scrum-half Turner who scorched her way over in the right-hand touchline.

McLean missed a difficult conversion but although Bailon reduced the deficit with a well-struck penalty, the home sides night would take a turn for the worse when flanker Canal was shown a red card for making contact with the head of an English player.

England coach Gary Streets nerves may have been settled by a 47th minute penalty from McLean but the game was turned on its head by Frances try nine minutes later.

It came from an English error in midfield as the ball was spilt and the French pack immediately picked and drove deep into the visitors territory before winger Allainmat supplied the finishing touch.

Yet England showed the mark of champions by refusing to panic under pressure with McLeans penalty almost immediately restoring their slender lead.

Some desperate defence from both sides limited scoring opportunities until the dying moments when France had the opportunity to break Englands Grand Slam dreams.

But Bailon just couldnt summon the extra energy to split the posts and England smuggled the ball out of play to begin wild celebrations.