England recorded their first win away to France since 2012 in an impressive all-round performance in front of a crowd of 13,700 in Clermont. 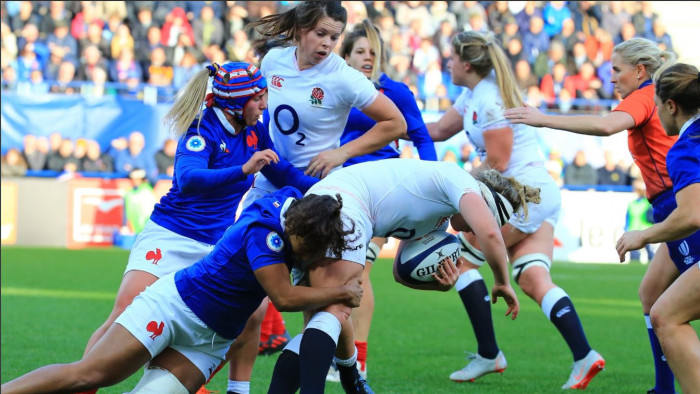 France threw the kitchen sink at England for most of the opening half-hour, but implacable English defence soaked up almost everything France threw at them before breaking out near the end of the first half to score two tries and go into the break 17-3 ahead.

The first 20 minutes was all France, but the result was just three points. The threat that England posed resulted in France putting extra numbers into breakdowns, allowing them to keep possession, but giving them few options. As a result the English line was barely threatened. A very kickable penalty was missed by Jessy Tremouliere after 6 minutes, though she made amends six minutes later to put France ahead 3-0.

France continued to press, but were unable to add to their score.

England, on the other hand, when they finally broke out of defence, looked a much greater threat. Their maul could only be stopped by French conceding penalties, and when warned that the next infringement would lead to a red card, had no answer to next drive which ended with a try for Sarah Hunter on 34 minutes.

France crossed the line early in the second half, but Tremouliere’s try was ruled out when she ran into one of her own players. It was one of a series of self-inflicted errors that were costly for the French, epitomised a few minutes later when, having battled down to the English 5m line, two over-thrown line-outs saw the game move back into the French half

Despite this, just after the midway point in the second half, and aided by a yellow card against Marlie Packer, France pulled a try back, Camille Boudaud ended a period of massive French pressure on the England line by diving over in the corner. Tremouliere brilliantly converted from the line, and France were back within a score. 10-17, and 26 minutes to go.

Strong English defence and French errors continued to frustrate the home team, and with eight minutes to go, a second Scarratt penalty pulled the visitors 10 points ahead after which England successfully saw out time.