England march on at Scotstoun

A new Scots record home crowd of 3,278 – twice the best before this season – saw a brave Scots team lose to England by 43-8. 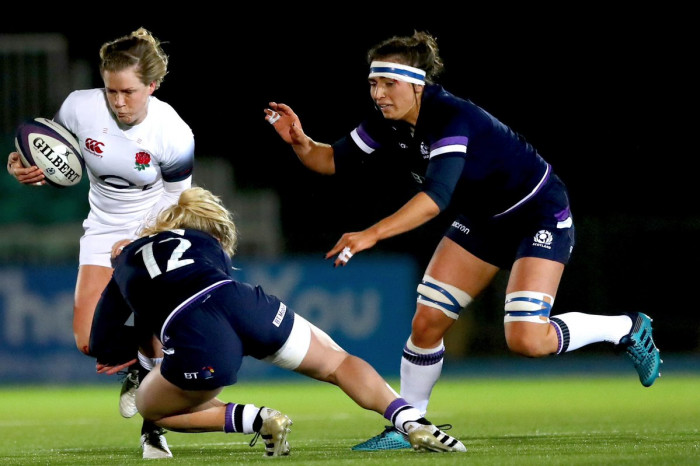 Scotland faced a huge task in the third game of the Six Nations, up against and England team full of pace and power. Scotland had already struggled up front, now there were faced with the tournament’s most powerful pack. Was this going to be another big England win?

It certainly looked that way at the start. Two England attacks brought two England tries from Danielle Waterman and Sarah Bern and England were 14-0 up after just 7 minutes.

But the storm subsided, and Scotland seized on England errors to come back into the game. First a penalty chance was offered for Sarah Law to convert, and then a handling mixup between two of England’s most senior players – Katy Daley-McLean and Waterman – resulted in Scotland’s first try at home to England since 2008. England, despite their apparent superiority, where pulled back to 14-8 midway through the half.

However, in no time England pulled themselves together and, aided by some scrappy Scots defence, scored a third try from Charlotte Pearce, brilliantly converted from the touchline by Daley-McLean.

The last quarter was all Scotland, aided by a yellow card for Izzy Noel-Smith, but England’s forward power was instrumental in keeping Scotland out and from the final play a dummied clearance kick from Daley-McLean on the England line became a pass to Waterman, which set up a sweeping move culminating in a try for Ellie Kildunne in the opposite corner – England had the bonus point and a 26-8 half-time lead.

The second half began as the first with an early English score, Pearce in at the corner again but another England yellow card - this time to Rowena Burnfield - allowed Scotland to ensure that England could not add further to that until well into the final quarter when a yellow for Scotland allowed England to take the advantage again, with first Lagi Tuima going under the posts before Waterman ghosted through for her second try.

But that was the final score of the game and Scotland defended heroically for the final quarter hour to stop prevent England from reaching the half-century.