England A name a strong line-up 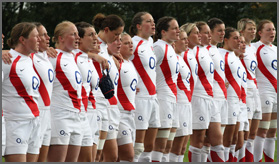 England have named their A team to take on the Black Ferns next Tuesday. Saracens backrower Sonia Green has been named as the sides skipper and the team has an experienced look to it with a number of seasoned internationals included. The A team take on New Zealand at Esher at 7pm on November 17th.

England A Head Coach Mike Barnett has selected a strong squad which includes Bristol's Kim Oliver, Wasps' Michaela Staniford and Richmond's Fran Matthews who share 70 caps between them. There are 11 fully capped players in the 22 and the starting line-up includes LaToya Mason, the scrum-half who is also on the bench this Saturday in the full test game against the same opposition.

England A Head Coach Mike Barnett said: "I am really pleased with the quality of players we have been able to select for this match. This is a massive game for England A so it's great to be able to call on such experienced players. Sonia is captain, but our capped players will also be able to offer her leadership support. At the same time we have some very talented younger players such as Laura Keates, Marlie Packer and Charlotte Male. They are stepping up from the under 20s so this is a big opportunity for them, as it is for all the players with the 2010 IRB Women's Rugby World Cup in London just around the corner.

Having travelled with a squad of just 26, New Zealand will have a solid side out in the mid-week A game though Brian Evans will no doubt have made some changes from his first hit-out this weekend.

"New Zealand will no doubt come over here as a very experienced side, Barnett added.

Their players will be very comfortable on the ball, and will have a great game understanding. They have a rugby culture which is second to none, so it's up to us to match them and cause them as many problems as we can, and at the same time keep our defence very tight."