England will play Canada in the World Cup semifinals after both sides comfortably won their first knockout games. 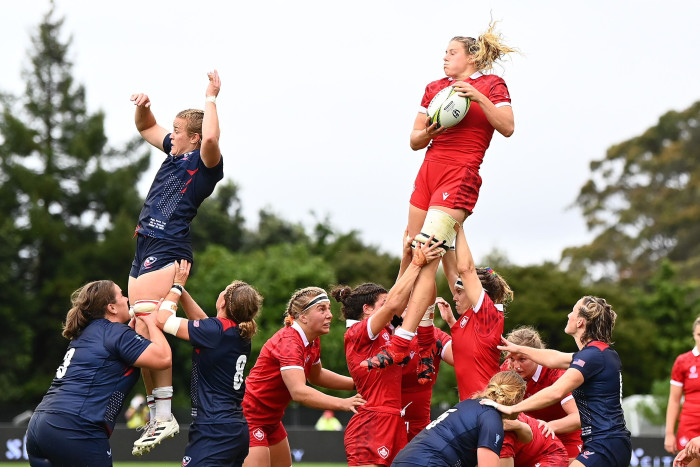 The rain was coming down heavily at the Waitakere Stadium in Auckland and the underfoot conditions were testing, but England scored three tries before half-time and never looked back, coming out on top 41-5.

The first points of the tie came in the eighth minute when captain Sarah Hunter, the number eight winning a record 138th cap for England, went over for a try after controlling the ball well with her feet at the base.

Centre Emily Scarratt converted to make it 7-0 and the second try of the day came for England on the half-hour mark.

The scorer of this one was openside flanker Marlie Packer and although it was unconverted, the same player soon went over again in the 39th minute. Scarratt did add the extras this time to make it 19-0.

Before these tries England had dealt well with 10 minutes when second-row Zoe Aldcroft was in the sin bin, while Australia openside flanker Shannon Parry, the captain, spent the end of the first half in there too.

Australia have shown during the tournament that when they get their attack clicking into gear they can cause teams problems - and they did that just before half-time when blindside flanker Emily Chancellor slid in for an unconverted try.

If they were to have any chance of overhauling England’s 14-point interval advantage, Australia had to get the first points on the board in the second half.

Sadly for them, that did not occur and, indeed, a try from second-row Abbie Ward came for England in the 43rd minute.

It was unconverted, but when hooker Amy Cokayne added another try 10 minutes later, England were 29-5 up and in control.

In the 65th minute Alex Matthews scored try number six for England and, at the death with the clock heading into the red, Packer completed her hat-trick. Full-back Helena Rowland converted that one to finish the scoring at 41-5.

Canada meanwhile ran in 20 points in the second half against the USA to make sure of their progress winning 32-11.

Canada had beaten USA 29-14 last weekend in pool play, but the latter had shown enough in that one to suggest they could cause problems in this last encounter.

It was the Women's Eagles who opened the scoring in the ninth minute when some strong forward play eventually saw hooker Joanna Kitlinski go over for a try. Centre Alev Kelter could not convert.

Seven minutes later second-row McKinley Hunt scored the first try of the day for Canada and captain Sophie de Goede converted to put them 7-5 up.

That advantage was stretched further to seven points when openside flanker Karen Paquin scored an unconverted try at the end of the first quarter of this contest.

There was then a big moment just before the half-hour mark when USA loose-head prop Hope Rogers thought she had scored her side’s second try.

However, after a long discussion, referee Joy Neville and her TMO Ian Tempest decided there was a knock on by openside flanker Rachel Johnson in the build-up and it was ruled out.

That left things at 12-5 before a USA penalty by Kelter got them to within four points at the break.

Canada were clearly frustrated by the inaccuracies which caused them some issues in the first period because they came out after half-time looking very focused.

Their third try arrived within a minute of the restart, winger Paige Farries running a great line and finishing well under the posts. Number eight De Goede converted and it was 19-8.

Kelter and De Goede then swapped penalties, the former also being yellow carded just before Canada’s three points after a head-on-head tackle.

With USA down to 14 players, before the hour mark Canada scored their fourth try of the game through fly-half Alex Tessier. De Goede’s conversion made it 29-11 and they had a healthy cushion now.

Despite the best efforts of both team, that was the way it stayed.