England to play France & Italy in the Autumn

England will play France twice and Italy once in their Autumn Test series. 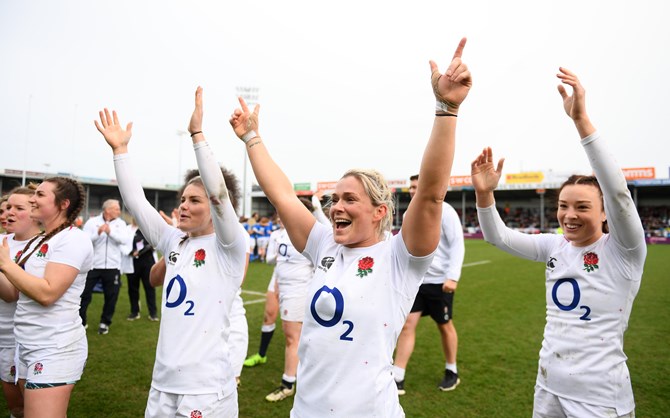 In the first of England’s two Quilter Internationals at home,  the teams meet again a week later at Sandy Park, which is also on Sky Sports, before Simon Middleton’s team take on Italy at Bedford Blues’ Goldington Road on Saturday 23 November.

The Six Nations match against Italy at Sandy Park in March 2019 drew a record 10,545 attendance for an England women ticketed home game outside of a Women's Rugby World Cup.

While this will be the first time Bedford has hosted a Red Roses international, England men’s U20s’ Six Nations clash against Italy took place at a sold-out Goldington Road earlier this year.

England Women head coach Simon Middleton said: “Playing France at any time is always a real challenge, it’s one of the toughest places to go.

“To then come back and play them on home soil at Exeter will be great. When we played there against Italy in the Six Nations it was probably the highlight of the tournament, with the exception of actually winning the competition.

“The way the crowd and the people of Exeter embraced the Red Roses left the biggest impression on all the players and the staff. If we get that again, it would be tremendous.

“Italy had a fantastic Six Nations and they are probably the emerging nation in Europe at the moment. It’s a fantastic ground and we know Bedford will embrace hosting an international fixture like Exeter and Doncaster did. Their fans are so passionate and love their rugby.”

Nicky Ponsford, RFU Head of Women’s Performance added: “Matches against two of our Six Nations opponents who we travel to play in 2020 will give a good indication of where we are as a group building on what we learnt in the summer.

“We’re delighted to be heading to Bedford and know the importance of taking the Red Roses to new audiences.

“Equally, Sandy Park is a first-class venue and we are really excited to work with Exeter Chiefs once again after the great experience both the players and fans had there last year.”

When England last met France, Emily Scarratt’s late penalty saw the Red Roses run out 20-18 winners in July’s thrilling Super Series fixture while they scored seven tries to France’s four in a 41-26 Six Nations victory in Doncaster back in February.

Italy finished second at the 2019 Six Nations courtesy of an eye-catching bonus-point win over France and will compete in Rugby Europe’s maiden 2021 World Cup qualification tournament which will be held in September 2020.