England put in a dominant performance in Liege, Belgium, this weekend to win the second European U18 championship, retaining their title. 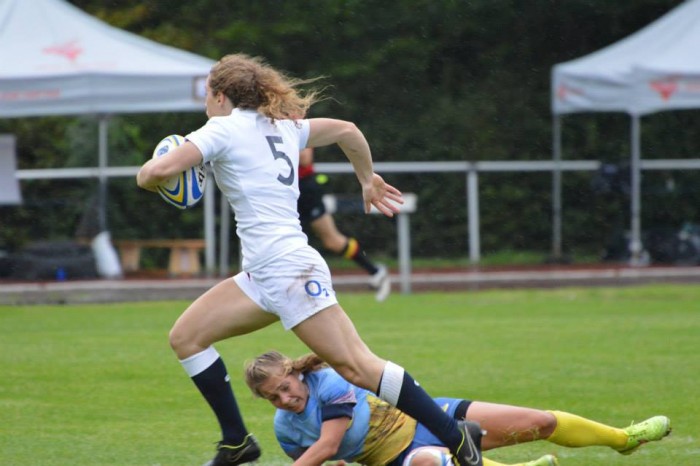 With over a quarter of Europe’s teenage players to choose from, an effective junior talent identification programme in place for two decades, not to mention their overwhelming win in 2014, England were always strong favourites for this tournament – and fully justified that position, although their win this year was tougher than last, when they failed to concede a point. They started in similar vein this time finishing the opening day as comfortable top seeds for the quarter finals following big wins over Ukraine and Germany, but finally had their defence breached by Portugal at the end of the day as the largely unfancied young "wolves" proved to be as unpredictable as their elders, holding England to just a 17-5 win - comfortably their closest game in the (admittedly short) history of U18s sevens.

In Pool B 2014 runners-up Wales were also surprised by Iberian opposition in their opening fixture when they could only draw with Spain. Spain had not played in 2014, when they had gone to the Youth Olympics, and their performance in this opening game showed that their invitation to Nanjing to represent Europe last year had been fully justified. They were clearly far stronger than their 11th seeding, making this pool (which also contained Ireland and Italy) particularly tough. In the end the Spanish took pole position on just points difference from Wales, while the fancied young Irish team could only finish third - giving them a very tough quarter-final (though even that was touch and go until the final game). It was particularly hard on the young Italians, who finished bottom of the pool despite good performances against Wales and Ireland.

In comparison Pool C was probably the weakest of the three, with the young Dutch team cantering to a 100% Day One record, though they were nearly upset by their hosts in the opening game. In fact all of Belgium's games were decided by a single score, their two-point defeat to the Netherlands being followed by a two-point win over Russia, and then a surprise 7-0 defeat to Sweden. However, despite only one win, these three close games were enough to give them a runners-up spot in the pool. The Russians had gone into their final game with the Dutch with a 12-point cushion over Ireland that - on the basis previous games - should have been enough to give them a quarter-final, but were blown away 24-0 confining them and Sweden to the bowl.

One Day Two, England continued with their imperious drive to the title, though again their defences were breached, beating Ireland 46-7, and Spain had a similarly predictable 24-0 win over Belgium. However elsewhere form, history and pre-tournament predictions went out of the window with first the Dutch, who followed their seniors by being shocked 10-7 by Portugal (despite huge pressure in the second half they could not overcome a 10-0 half-time lead for the Portuguese), before a deserved 27-12 for Germany over Wales sent their supporters, both at the ground and following on the web, into dreamland.

After that excitement the rest of the tournament followed a more expected script, with England easing past Germany 43-5 (though the Germans were first to score) and Spain ending Portugal's run 22-0. In the final England quickly established a 22-0 lead at half-time, but Spain came back well with Teresa Bueso getting two consecutive scores before a final English try ended their resistance 27-10.

The Dutch took the Plate comfortably, rueing that quarter-final defeat to Portugal, and Wales slipped to seventh overall - an outcome that will have disappointed them.

Overall, then, England - with all the advantages listed above - remain well in advance of the rest of the continent at this level. However, truth be told there was remarkably little to choose between the runners-up Spain and the next half-dozen teams, down even to Italy (who won the bowl, and might have done well in the plate if the pool draw had been better for them). It is now up to the home unions to give these potentially talented young women the opportunities that will turn them into the stars of the next decade.

To view all the results of the European Championship, click here