A crowd of 9,748 at Sandy Park, Exeter saw a superb all-round performance by England that resulted in a 43-12 win against New Zealand. 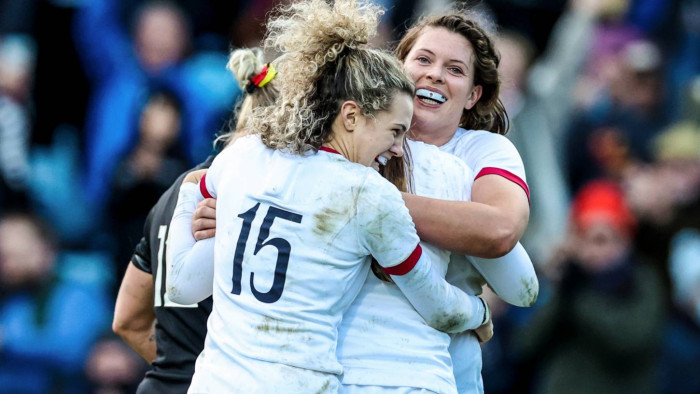 This was the 100th Black Ferns test match recognised by the New Zealand RU, but it may be one they prefer for forget as they fell to comfortably their largest ever defeat, conceding more tries (seven in all) and more points than ever before. It was also two years since the Ferns last test, and it perhaps showed..

England, on the other hand, were almost faultless. Indeed England’s biggest error came in the opening two minutes when, given a penalty right in front of the posts, they instead when for the lineout – and then lost the throw to the Ferns, who then spent nearly the next ten minutes at the England end.

But England defended well, and their next two forays into the New Zealand half both resulted in tries, both from Abbie Ward ending positions set up by great breaks down the line by Abby Dow.

Meanwhile New Zealand’s set-pieces, and the line-out in particular, was falling apart giving them almost no base from which to fight back. England were stealing New Zealand throws at will, to the extent that after 20 minutes the Ferns started to opt for scrums from penalties instead of kicking for touch.

Even so the third English try that ended the half came from another line-out steal – the seventh or eighth of the half – the ball moved quickly across the field for Kildunne to score. England led 17-0 at the break.

New Zealand started the second half with more purpose, patiently looking for opportunities and after 5 minutes finally got on the board, a sublime kick through from Alley finding debutant Bremner who ran in under the posts.

But within minutes Bremner was in the sinbin, the referee’s patience running out, and while the Ferns were down to 14 England scored twice more. A maul ending with a try from Lark Davies after 56m, and then Holly Aitcheson found the New Zealand line opening up in front of her. England were ahead by 29-7.

At last a line out functioned properly, and a New Zealand maul forced its way over the England line – but they were held up, and three minutes later it was England who scored Abby Dow seizing on a loose ball to race away. England lead by 36-7, with just nine minutes to go.

With the Ferns set piece now working they showed what they were capable of, with a scrum inside the England 22 being worked quickly out to Stacey Fluhler who scored in the corner.

But the last word was with England, and player of the match Zoe Harrison who scored England’s seventh try from the final play of the game.

The result also means that England remain No 1 in the world and become holders of the Utrecht Shield.