England stars to promote the game.

A series of double-headers involving Premiership and youth sides will take place this weekend in England as the country’s international players do their bit to promote the game. 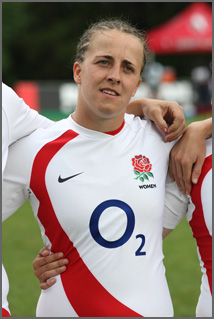 All six of the Premiership games this weekend will be preceded by a youth girls game involving local teams and following the end of the matches, leading England stars from both teams will lead a question and answer session for the young players.

Ahead of the Darlington Mowden Park Sharks and Bristol game, the Darlington Under 15s and cluster side Wickham/Durham will play a curtain raiser match ahead of the main event. Sharks' Katy McLean (pictured left) and Tamara Taylor and Bristol's Sophie Hemming and England captain Catherine Spencer are just a few of the England stars that will then lead the Q&A session after the game. .

The Richmond and Team Northumbria game will be preceded by a game between Morpeth/Alnwick Under 18s and Tynedale/Rockcliff Under 18s and the Wasps and Lichfield game in London will be played after the Middlesex Leopards take on the Bucks Jesters at U18 level.

Claire Antcliffe, a Women's Rugby Development Manager for the RFUW, said: "This is a very exciting season for women's rugby, with the world cup being staged in London in August and September next year. Using matches like this is a terrific way of exposing young women and girls to top flight rugby, as well as helping to raise awareness of the sport.

"These players are being given a unique chance to play in front of world class players, and then quizzing them about what it's like to play for their country. This will be a great way of showing the public how accessible women's rugby is and highlighting the high standard that women's rugby is at."