A dominant second-half performance by England saw them leave Fiji behind after a tricky first 40.. 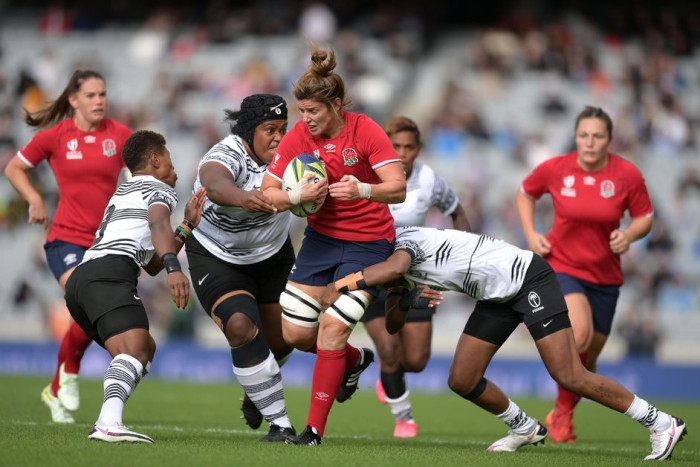 Fiji are 21st in the World Rugby Rankings so it was always going to be a tough ask for them on their first ever Rugby World Cup outing at Eden Park in Auckland, but they performed well especially in the first half, scoring three excellent tries.

However, in a pattern that has been clear since the Super W, they ran out of steam in the second period, England scoring 10 tries on their way to their 26th test in a row.

England’s first try came in the fifth minute when scrum-half Leanne Infante fed winger Claudia MacDonald who went in out wide from short range. Centre Emily Scarratt could not convert, but they were 5-0 to the good.

Fiji are known for playing an expansive game, but it was some big drives by their forwards that nearly got them over for a score in the 13th minute. The England defence did well to hold them up over the try-line and five minutes later play was right back up the other end.

From a well-controlled driving maul, England hooker Amy Cokayne scored an unconverted try to make it 10-0 and then the third try came for England in the 27th minute when second-row Abbie Ward powered over. Scarratt converted and things got worse for Fiji when their captain Sereima Leweniqila was yellow-carded following an incident in the lead up to the try.

That made it 17-0 and Fiji were the team down a player, but it did not look like it when they scored a wonderful try - their first ever at a Rugby World Cup - eight minutes before half-time.

A break through the middle of the English defence by full-back Roela Radiniyavuni and then a well-timed pass sent right-wing Alowesi Nakoci in for the score. Scrum-half Lavena Cavuru converted and it was 17-7.

To finish off an entertaining 40 minutes of rugby there was still time for both sides to score another try apiece.

Fiji’s second try came in the dying seconds of the half, centre Sesenieli Donu finishing off a good move. Cavuru added the extras and it was 24-14.

England came out firing after half-time and added four more tries in the first 13 minutes of the second period.

Cokayne got her second, second-row Zoe Aldcroft went over and winger Lydia Thompson crossed twice. Scarratt converted two of them and it was suddenly 48-14.

MacDonald and replacement Abby Dow, back after long-term injury, were next to score and another Scarratt conversion made it 60-14.

With Fiji tiring in the final quarter, four more tries came from England.

They came from Infante, MacDonald with two - to make it four on the day for her - and substitute Connie Powell. Fly-off Zoe Harrison converted two of them.

After putting in such a great effort, it was perhaps fitting that the last word went to Fiji, Cavuru going over for an unconverted effort as it finished 84-19.

After the match England captain Sarah Hunter said: “First of all, credit to Fiji. This was their Rugby World Cup debut and they came to play, rattling us as we only led 24-14 at half-time.

“In the second half we went back to our game plan and managed to score some good tries which was really pleasing.”

Player of the match Sadia Kabeya added: "It was a game of two halves, definitely. I think first half we always knew Fiji were going to throw lots of things at us and I think we had to take that in our stride. Second half, we came out as a team, we came together and we got the points on the board. Definitely a game of two halves, lots to learn but lots of positives to take away."

"I think our go-forward, our aggressiveness. We always have pride in our attack and our carriers, we have got huge ball carriers in our team. Looking forward to next week and tightening up our defence but we’ve got our attack in order, I think."

"Fiji keep you on your toes definitely, always running around. You’ve always got to keep your eyes open, you’ve got to have eyes in the back of your head as well. But really fun, really good team to play against, they’re really aggressive as well, which I like, being able to get into tackles, get into carries. So, really enjoyed playing against them and they bring a new flair to the world stage."

Fiji coach Senirusi Seruvakula said: "I think it was the biggest match of the girls’ lives, especially playing against the world number one and a very professional outfit. There’s a big learning from that. It’s the first time for us to be in a World Cup and we’re here, so we’ll keep on working hard for the rest of the matches coming."

"It’s a dream come true for a lot of these girls who always watch on the telly Super Rugby and test matches. Now they are here and playing rugby at Eden Park."

As for Fiji’s performance; "It was really disappointing because the first half we were there and when it came to the second half, the injuries started to pop up and girls were not switching on. And that’s a lesson, you play at a high level of rugby in the Rugby World Cup."

"We need to be disciplined and not make a lot of errors, especially playing against England. As you can see, all their tries come from our errors. So, that’s a big lesson, so we just need to stay disciplined and have the possession at all times."