England are the only unbeaten team in the Super Series after a 19-17 victory over Canada Women in San Diego. 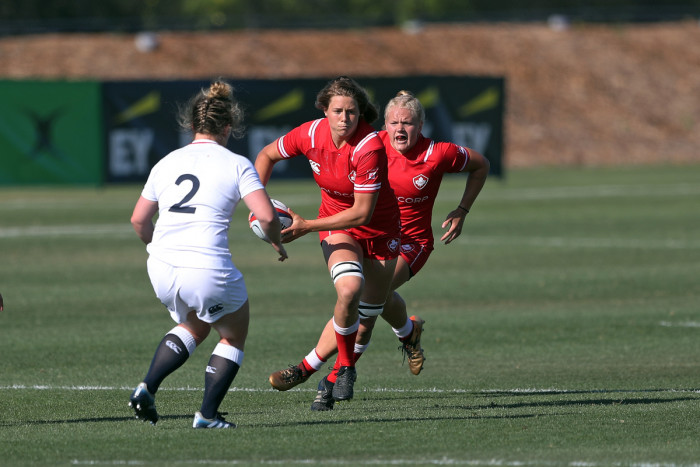 After opening with a 38-5 victory over USA in round one, England faced a real physical test against Canada who came into the match off the back of a win over France – who themselves earlier in the day beat world number one ranked New Zealand in round three of the Super Series.

It was a tight opening quarter with no scoring in the first 20 minute, but it was the Canadians who got the first try when a series of pick and drives saw Tyson Beaukeboom go over. Those were the only points of the first 40 minutes encapsulating the tight encounter as Canada led 0-5.

Minutes into the second half, Canada were down to 14 players as Gabby Senft was sent to the sin bin for her off the ball challenge on Amber Reed, but a breakaway saw wing Paige Farries race in from her own half for a second try for the North Americans.

After a driving lineout maul by England was held up, from the resulting five-metre scrum a superb nudge by the forwards in white saw them awarded them a penalty try.

It was two tries in two minutes for the Red Roses as they took the lead for the first time when a slick backs move was worked to Kelly Smith who avoided two tacklers from inside her own half to race away – her second try of the tournament.

Canada responded when they worked the ball to the right wing for Farries to cross for her second, before Abbie Scott was sent to the sin bin for an accumulation of penalties by England.

England though were winning a number of scrum penalties in the second half as their finishers made an impact and put real pressure on the Canada line, which eventually saw Sara Svoboda sent to the bin following a cynical challenge with seven minutes remaining.

From that penalty it was another powerful scrum from five metres out that saw Sarah Hunter dot down off the back of it, but the missed conversion saw it sit 19-17 to England with five minutes to go where they held on for a narrow win.

The victory is England’s seventh in a row against the Canadians and they will next play France on Wednesday 10 July and then end the tournament against the world’s number one ranked side New Zealand on Sunday 14 July, with both matches available on Sky Sports.

Head coach Simon Middleton said: “From a character point of view and finding a way to win, and showing a will to win we were class. There were lots of things we weren’t world class at and there are lots of things to work on, but there were a lot of new combinations so we always knew it would be a tough game with Canada being outstanding so far in this competition.

“We spoke at half-time that we weren’t physical enough in the contact, we didn’t have enough intent and we couldn’t get the ball off them. We had to work for everything and in that today it was a real squad effort and everyone got us the result.

“Sarah Hunter is unflappable isn’t she? She makes great decisions on the field at the right time and we’re blessed to have her. She would be the first to say she’s supported by the other members of the team and leadership group.

“France have done a great job against New Zealand so that next game will be a great game, it always is against the French.”