England scored over 50 points in Italy in securing a consecutive Grand Slam in this year's, finally finished, Women's Six Nations. 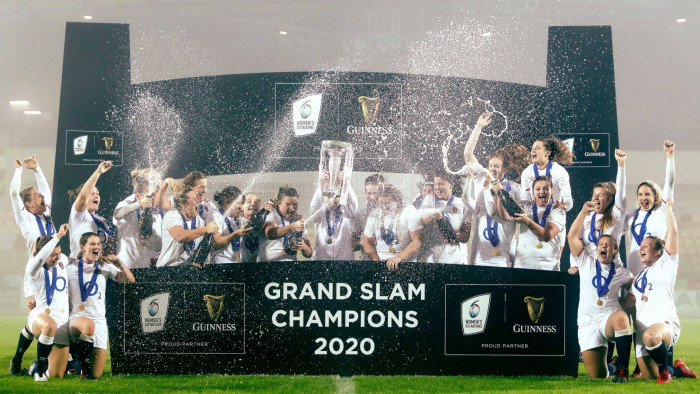 The final 54-0 scoreline highlighted England's dominance and they end the tournament having remarkably conceded just 20 points in their five games.

England were on the board early when Ellie Kildunne's footwork reminded her team what they had been missing while she was playing 7s, with a great finish which was converted by the captain on the day Emily Scarratt.

Poppy Cleall then burst through to add a quick second before Scarratt hit a great line to power over herself with Abbie Ward increasing the scoreline to 28-0 at the turnaround.

Sarah Bern powered over early in the second half before Jess Breach, the tournament’s top try-scorer, finished going into the last 10 minites.

After Leanne Riley crossed in the 78th minute, England’s runaway victory was then topped by a final try from Marlie Packer in the dying moments of the game.

England head coach Simon Middleton: “At this moment in time we’re absolutely over the moon because there are players there haven’t played international rugby for a year, or others who haven’t for two or three years.

“I think the girls have been absolutely magnificent and what a great squad effort – the finishers who came on were fantastic and gave the game a real feel good factor for us.

“The whole reflected where we’ve come as a group – we started with loads of energy, then it got a little bit scratchy but then we really started to gel and finished really strong with energy and accuracy.

England lock Abbie Ward: “I was watching all of the games in February and March and the momentum that the girls were building and it was fantastic as a team mate to see that.

“I think the pressure was on to finish the Six Nations on our terms and the Grand Slam is something we’ve spoken about, to do it back-to-back is rare and something we haven’t secured for a while.