England too good for Barbarians

A slick and clinical England side made sure of a win in their historic first match against the Barbarians by cruising to a 40-14 victory at Twickenham. 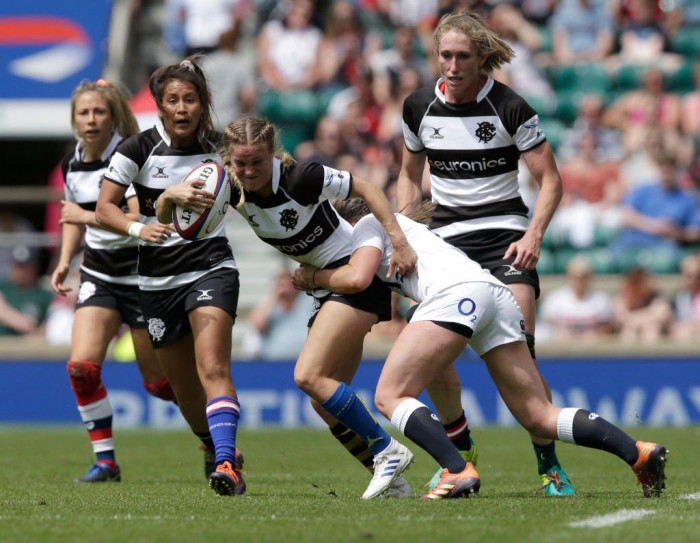 Worcester Lark Davies led the charge by scoring a hat-trick in front of a  crowd of 17,402, while wing Kelly Smith, flanker Poppy Cleall and prop Hannah Botterman also touched down.

England led 28-0 at half-time but the Barbarians threatened a fightback through tries from Fiao'o Fa'amausili and Millie Wood until Davies and Smith put the result beyond doubt.

It was from a driving maul from which England took the lead after a couple of minutes with Davies dotting down from the back of it and Zoe Harrison converting.

England dominated possession in the opening exchanges and were rewarded with a second when Hannah Botterman wrestled her way over from close range, before Zoe Aldcroft's break set up Poppy Cleall for an easy run in.

Davies got her second from a pick and go close to the Baa Baas try line, with Harrison's conversion keeping up her 100% record for the half as it sat 28-0 at half-time.

After Kelly Smith had a try disallowed for a forward pass in the build-up, the Barbarians got on the score sheet when Sene Naoupu broke the defensive line to feed Millie Wood to cross.

The Baa Baas improvement continued in the second half and they got a second when Fiao’o Fa’amausili hit a short line of ex-England full back Danielle Waterman to race over untouched.

England's response came from another forwards effort from a rolling maul off the back of a line out, and it was Davies again whose controlled presence at the back of it saw her cross for her hat-trick.

A slick backs move got a seventh for the hosts when Lagi Tuima's looping spin pass found wing Kelly Smith who stretched her legs out wide to dive over.

This game was part of the preparations for the Women's Rugby Super Series which takes place later this month, with England taking on the best five sides in the world - New Zealand, France, Canada and USA - in San Diego.