England too good in Bayonne

A dominant performance from England’s pack helped them to this year’s Grand Slam as they proved too strong for a French side who failed to take their chances and struggled with England’s set-piece. 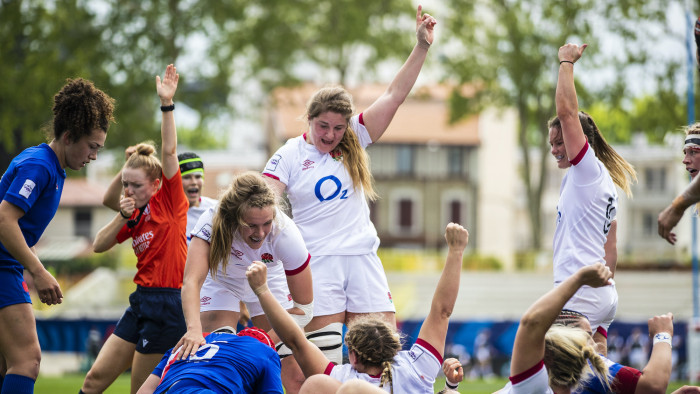 Three of England’s tries came from driving lineouts, a weapon so powerful and well-organised, that few teams have been able to do much about it this season.

But it was France who started better and they were on the board after just three minutes when a lively started was rewarded when Romane Menager took a short pass and burst over under the posts.

Zoe Harrison’s knock on gave France a scrum five metres out and the number 8 latched onto the pass from Laure Sansus, sending up the noisy Bayonne crowd.

Three big hits from Madoussou Fall epitomised the early French effort and it took a vital kick from Helena Rowland to finally get England into the opposition half.

From there, their driving lineout took over. It was unstoppable against Ireland last week and France struggled to get a hold of it, eventually conceding to Sarah Bern.

The same weapon was deployed just minutes later – this time Abbie Ward came up with the ball as France struggled to deal with England powerful maul again.  Emily Scarrat’s conversions made it 7-14 and suddenly England started to look dominant.

Chloé Jacquet’s kicking was causing England problems though and when Lydia Thompson failed to deal with one excellent punt, France got themselves into the 22 but failed to win the lineout and England recovered.

Bern crashed over again after another driving lineout minutes later before France finally got a run with the ball with Sansus doing her best to drive her team forward.

Her snipe helped the hosts into the 22, and England started to feel the pressure, being warned by Hollie Davidson after conceding three penalties in a row. France could not make it count though and England turned it over.

France came again and England appeared lucky not to have conceded a penalty try after several rolling mauls were pulled down and it stayed 7-21 at the break.

France started the half strongly with Jacquet and Fall both handling beautifully before Zoe Harrison was yellow carded for a deliberate knock on. France were making a habit though of making errors at vital moments and this time England won the scrum penalty to relieve the pressure and count the clock down.

The match fell into a pattern of France getting opportunities but failing to take any, with a litany of missed lineouts in the England 22 costing them particularly badly. Scarratt added three points to make it almost impossible for the hosts to come back.

Emilie Boulard off the bench provided some spark with one great solo break taking a brilliant Emily Scarratt tackle to prevent a try and did finally get some reward when Annaëlle Deshaye dived over after some well worked lineouts, but it was too little too late as this brilliant England team deservedly went home champions.