England too strong for Scotland

England were too good for Scotland, winning 52-10 in Doncaster. 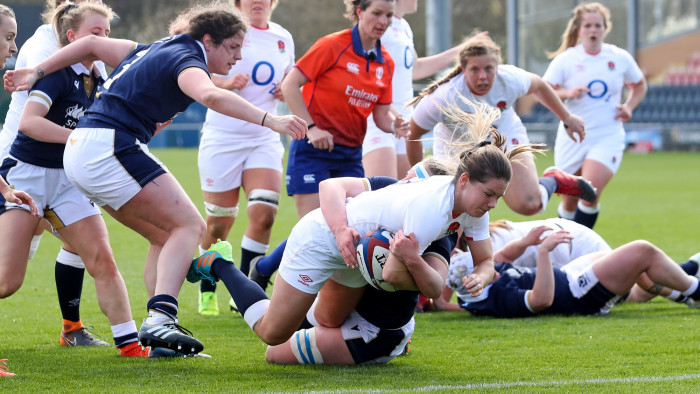 Poppy Cleall was player of the game for England, with 19 carries and 15 tackles and a try,  while her sister Bryony also dotted down.

Hannah Smith scored Scotland's only try, in a game where though they were outclassed, there were some positives to take into the game against Italy, thanks to a first try against England since 2015 and some bright passages.

England opened the scoring thanks to powerful play from the Clealls up front and Marlie Packer was on hand to break through and dive over with Emily Scarratt adding the extras.

Though Scotland were defending well enough, scrum-half Leanne Riley extended the lead after a snipe at the base of a five-metre ruck for England’s second score.

Helen Nelson then put Scotland on the scoreboard with a penalty, but England’s response was immediate.

Hooker Lark Davies surged over from a trademark rolling maul, before Bryony Cleall marked her return to international duty with a score, and in doing so secured England’s bonus-point.

As half time approached, Jess Breach collected a Helena Rowland cross-field kick, and showed superb pace to canter over. Scarratt converted all three tries, making it 33-3 at the break.

England started the second half with the same intensity as they had ended the first, and it saw Rowland dart over for her first Test try after three minutes.

The second half then became rather stop-start and a Poppy Cleall yellow card handed Scotland a one player advantage, and they were able to immediately capitalise through a Hannah Smith try, converted by Nelson. England then went down to 13 players with Davies sin binned for a high tackle, and then Scotland replacement Molly Wright was shown a red card for making head contact with the shoulder.

Returning to the field, Poppy Cleall joined her sister on the scoreboard in the 70th minute, the benefactor off the back of a five metre rolling maul. It was Poppy Cleall's fourteenth Test score. England were awarded a penalty try with two minutes remaining after Louise McMillan brought down a promising rolling maul, rounding out a comprehensive victory.