England’s U18 team proved to be overwhelmingly the strongest team in the first-ever Women’s European Sevens Championship at that age-grade played in Enkoping in Sweden last weekend (13/14th September). 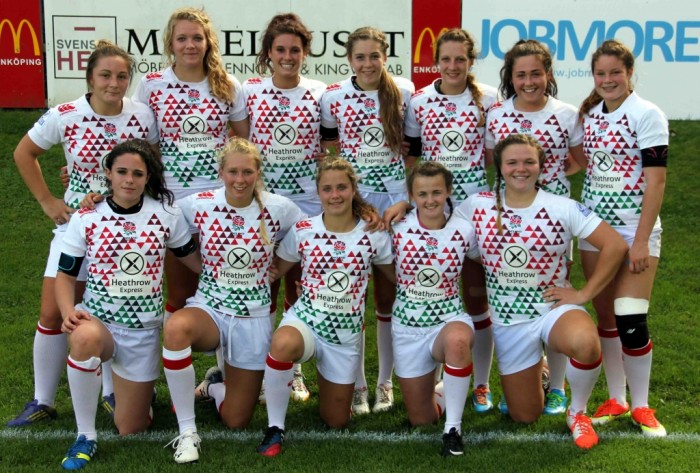 The rest of Europe were no match for England’s youngsters in a tournament hailed by Rugby Europe as a showcase for the continent’s “stars of tomorrow”, giving a first taste of international rugby for players who will be competing for places at the Tokyo Olympics in 2020 – or even the games of 2024.

Runners-up Wales and third-placed Netherlands both demonstrated the value of a strong junior programme, with the Welsh players undoubtedly benefiting from coming straight into the event from an inter-regional sevens tournament at the UK’s Sainsbury’s Schools Games.

However, it was England who stood out from the start. Not only had their squad also benefited from participation in Schools Games, but their squad included Sydney Gregson and Abbie Brown, who already have full international experience, and were led by Amy Cokayne, who played NPC rugby as a schoolgirl in New Zealand and trained with the Black Ferns before returning to England last year.

England scored 45 unanswered tries in their six games, scoring 269 points and conceding none. Their closest game was their 36-0 win over Russia in the semi-final, with all other games being won by a margin of 43 points or more, culminating in a 54-0 win over Wales in the final.

Despite the margin of their victory Gregson was first to acknowledge the potential shown by their opposition.

“The other teams were a decent standard”, she said, “and there were some close battles between them, the semi-final between Netherlands and Wales could have gone either way! They just lacked experience – for many this was their first tournament – and I think teams will build and improve as the years go on.”

“The tournament was run very well and there was a lot of support which made it really special. I hope it carries on in the future because it has the potential to play a big part in development of the European sevens game.”

“I think with England we had a very good support team behind us with Russell Earnshaw as head coach who is world class, while having Simon Middleton (senior sevens coach) as assistant coach gave us a lot of motivation and hunger to perform well. We also have a very good physio who looked after any niggles and ensured we got the right recovery after each game, and a very organised manager which made us a lot more relaxed on match days.”

“After having only three training camps together we really gelled as a team throughout the tournament on and off the pitch which made it easier to play for each other as one team. It didn't matter which seven were on the pitch we all played each game as if it was the final and put everything into it. We really wanted to win the tournament and there was a lot of talent in the squad which showed.”

“It was an amazing feeling for all of us to have won the tournament as we put everything into every game and every player worked really hard to stick to the game plan.”

The unpredictability of the tournament affected the seedings and with no previous tournaments to base these on, Rugby Europe used the results recorded by the national senior teams last season. By chance this resulted in most of the strongest teams being placed in England’s Pool B, with teams from their pool winning all of the second day knock-out games.

As a result, Wales – second in England’s pool – were also overall runners-up and Ireland, who only missed out on the semi-finals following a tight 12-5 defeat to Wales, were probably deserving of a higher final position than fifth as they won the Plate by almost as large a margin as England won the cup.

Nonetheless the Pool A teams were not that far behind. The pool was won by eventual third-place winners Netherlands, who were too strong for Russia in both of their games, and only lost to Wales 26-5 in the semi-finals in a game that was closer than the final score suggests. Pool A runners up Russia finished fourth and pushed England more than any other team in their semi-final.

Russia also suffered from conceding two of the tournaments four yellow cards, most of which were awarded for ponytail-pulling, which was something of a hazard given the preferred hairstyles of many of the players!

Overall the tournament showed the depth of women’s rugby talent in Europe. When it is remembered that teams such as Spain, France, Scotland and Ukraine were (for various reasons) absent from this tournament it is clear that European women’s rugby has a very strong future.