England secured a 19-13 opening win in France and with it made themselves overwhelming favourites to go on and win this year's title. 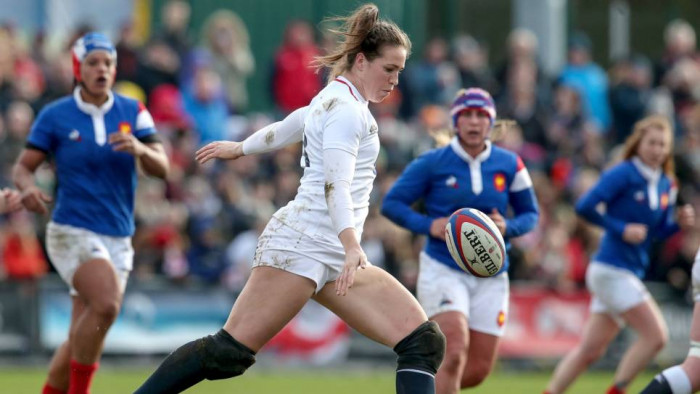 France will be kicking themselves all week watching replays of a game where they had chance after chance in the second half, not just to get closer on the scoreline, but to win the match.
A dominant scrum gave them multiple chances but credit to England's heart and desire in defence, which kept them alive and in the end, the visitors' ability to convert their chances was the difference between the teams.

England showed their intent early by putting width on the ball from the off but France weathered the storm. albeit they were back-peddling throughout the first few minutes.

Wasps winger Abby Dow broke away down the right to bring England within a metre and then France had to throw everything in defence back on their own line to keep the score at zero.
England kept coming though, and an Emily Scarratt burst created space for Dow to grab the first five points which had been coming since kick off.

With Katy Daley-Mclean a constant threat, a second score seemed inevitable and this time it was the pack who provided it with a well driven maul shoving Vicky Fleetwood over.
France hit back when a super break from Gaelle Hermet from a poorly defended ruck helped Laure Sansus over for a score that came a little against the grain and from there France seemed to take motivation from the large and noisy crowd and their scrum in particular stepped up to the occasion.
Jessy Tremouliere kicked France to within two points and it was more than game on at 10-12.
France then lost centre Gabrielle Vernier to injury but ended the half on the up with the momentum shift going their way and it took a brilliant England turnover to stop them from going into the break with a lead.
England brought Sarah Bern off the bench after the turnaround  to help steady up their scrum, but it was on the loose she made her immediate impact, with a superb finish for a try which was ultimately disallowed but showed what she was capable of given time and space.
France had their chances, with Sanus in particular a real threat, but they couldn't put it together in the England 22, with the visitors doing enough to hold them out.
Romane Menager and Safi N;Diaye combined numerous times to power France into the England 22 but as the game wore on their missed chances almost went into double figures as England just about held on against wave after wave of attack.
England then pushed the lead out with a fantastic score with Amber Reed giving the neatest of passes to Scarratt who burst through the middle and power home to score under the sticks. She converted and England had a 9 point cushion in another score that went against the run of play in the game.
But France kept the pressure on - with their dominant scrum giving them chance after chance but England kept on fighting with a miraculous turnover from Daley-Mclean clearing one almost certain score before finally Tremouliere kicked a penalty to get it to 13-19 but it wasn't enough as England managed the final minutes well.

England will surely now be unstoppable in the Championship.

Their head coach Simon Middleton: “It was intense - I think the phrase we’ve been using quite a bit is proper Test match.

“We were absolutely fantastic in the first 25 minutes of the game where we did everything that we wanted to do and we did a great job of dominating the field position and keeping the crowd under control.

“France are an exceptional side and you’re never going to dominate them for a full game and as soon as they got a foothold it became a real fight.

“I thought we showed some great character defensively in that second half in particular and then we came out of it on the right side.”