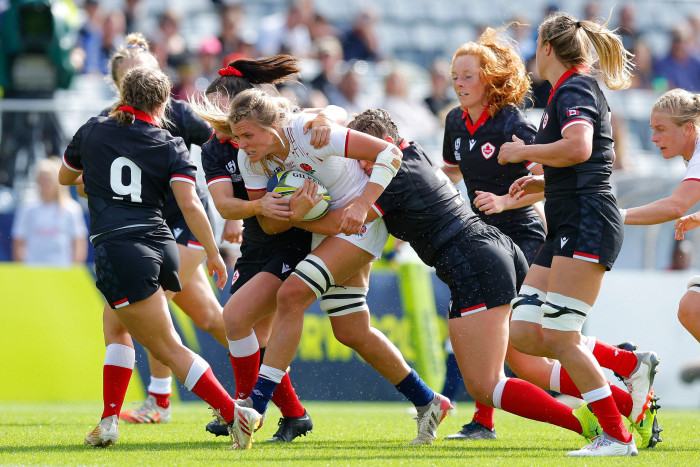 In a game that felt on the edge right till the final seconds, England took all their chances, while Canada will rue some opportunities missed.

You would not have known watching this as a newcomer that one team was professional and one team was amateur, so good were Canada over the 80 minutes.

England lost prop Hannah Botterman and scrum-half Lucy Packer before the game as pre-match injury pull-outs, but they started the game brilliantly despite the disruption defending early Canadian onslaughts and then scoring with their first chance.

Marlie Packer rumbled over from a typical England driving line out and then England scored again when Zoe Harrison kicked to the corner and as they threw the ball wide, Helena Rowland put Abby Dow away.

Canada hit back via a superb break from scrum-half Justine Pelletier from the back of a scrum, booting the ball through for flanker Karen Paquin to score.

Emily Scarratt, who had had a shaky start in open play, booted a penalty to slot England’s nerves for a 15-12 lead.

Scarratt slotted another straight after the return with England looking to turn the screw, though losing Helena Rowland, who had been brilliant was a huge blow.

Canada came hard in attack with Elissa Alaria, and Karen Paquin all prominent and as they hammered away at the England try line, a huge turnover led to the try of the tournament.

England moved the ball wide and from there Claudia MacDonald and Abby Dow linked up with Dow running about 70 metres to score a wonder try.

At 26-12 Canada could have been forgiven for losing heart, but this side don’t do that and they came again, with England forced to concede penalties, with Vickii Cornborough sent to the bin for her part in stopping a drive.

Canada had a raft of chances they failed to take, despite a couple of blistering runs from winger Paige Farries and England ground it out in defence.

Eventually a try did come and it was worth the wait.

Off the bench Tyson Beukeboom latched onto a ball from Tessier and with Sophie de Goede converting there was just seven points between the teams.

A late botched lineout meant Canada ran out of time on the clock, with England hanging on to win a belter.

Canada will play for bronze next week but they can go home proud and looking to the future with confidence.