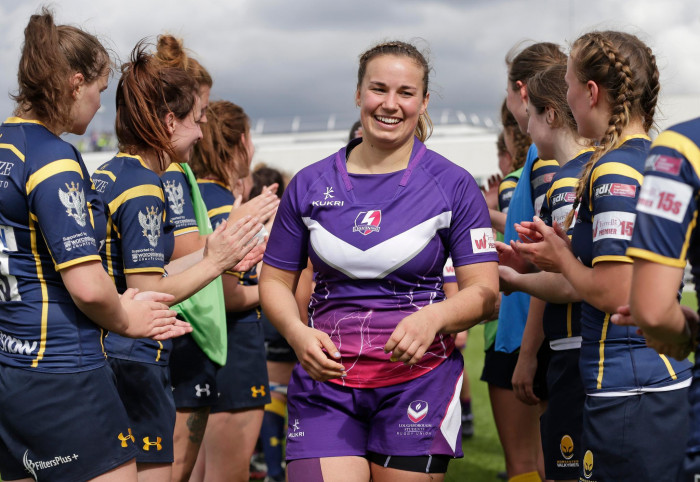 There was much interest, and not little controversy ,earlier this year when England Rugby announced a new look and revamped Premiership for it's women's game.

A significant cash boost, a headline sponsor, the arrival of new teams to the top league and the omission of one stalwart all combined to ensure that the league's arrival handed the domestic game exposure it had not seen for years - and it has been a fascinating opening few rounds.

First to the on-field developments.

The team leading the league after two rounds is Gloucester-Hartpury, the west country team who have been building their base for a few years under the leadership of Susie Appelby and whose connections with a university base (and years of hard work) means that this side is packed with athletic talent and emerging young stars.

Other newcomers to the top league, Loughborough Lightening have also made a good start - recruiting Sarah Hunter was a key bonus for them - while it has been good to see Richmond looking resurgent after a tough season last year with many of its top players switching to the colours of Harlequins.

Off the field, it has been a interesting few weeks with a large number of player transfers to London clubs in particular.

The women's game is not used to such a spark of interest in player transfers, and while clearly it's tough for the sides who are losing players - it is generating stories of debate in mainstream press when typically the game is reliant on the national team for headlines.

Wasps have been the main beneficiaries of domestic moves, with the savvy Giselle Mather scooping four star players. Rocky Clark has joined her side from Worcester while Amy Cokayne, Justine Lucas and Harriet Millar-Mills all make the move from Lichfield, the side who didn't make the cut for league status.

With two narrow losses so far, expect Wasps to be a much stronger force in the rounds ahead - and there are more top signings to come we hear for the west London side.

Saracens have also made some strong signings with Marlie Packer and Poppy Cleall both moving from Bristol but probably the headline signing of the past week is the move of French skipper Gaelle Mignot to Richmond.

International players joining Premiership is nothing new - Saracens for example have had a long history of signing top Canadian players; Wasps have often been a home for New Zealanders and Richmond have lured an array of European stars over the years, but Mignot's arrival is more of a game changer.

As French skipper she is one of the faces of her team in France and with the French top league also luring players from around the world, it says a lot for the English league and the professionalism it is emanating that Mignot is upping sticks and moving to London.

It bodes very well for the future.

Of course there are and will continue to be speed bumps. Sides I have spoken to complain about the extra and significant administrative burdens that come with participation in the league and provincial sides are naturally nervous about player movement towards London - but it has been fantastic to see so much interest in the games; player movements and the accessibility of footage from the games.

More to do - but a great start.