The first round of the Tyrrells Premier 15s action provided plenty of drama as the brand-new league got underway with five competitive clashes. 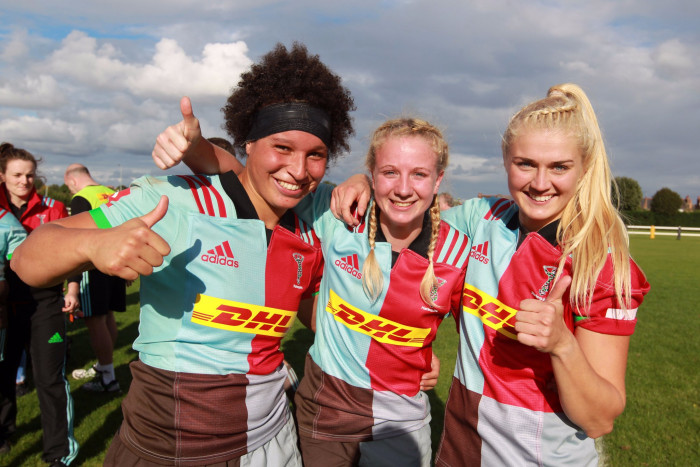 Two of the competition’s new faces, Loughborough Lightning and Gloucester-Hartpury, had the perfect start to life in the top tier, while there were also victories for last season’s champions Harlequins, Saracens and Richmond.

The first-ever Tyrrells Premier 15s match took place on Saturday lunchtime and Loughborough Lightning more than lived up to their name as they flew out of the blocks to defeat Worcester Valkyries 46-12.

With England captain and Lightning assistant coach Sarah Hunter watching on from the sidelines at Loughborough University, first-half tries from Olivia Jones (2), Bethan Zeidler, Natasha Jones and Charlotte Pierce saw the hosts 29-0 up at the break.

They continued to carve through the Valkyries defence in the second half as Ofure Ugiagbe, Lucy Nye and England Sevens international Celia Quansah all crossed, although scores from skipper Lark Davies and Zoe Bennion in the last five minutes gave Worcester something to build on moving forward.

After Loughborough and Gloucester-Hartpury’s triumphs, Firwood Waterloo came agonisingly close to making it a clean sweep of opening weekend wins for the league’s three new teams but Saracens produced a late comeback to triumph 22-13 at the Memorial Ground.

Firwood Waterloo outmuscled Sarries for large portions of the match and led 3-0 at the break through Bethany Stott’s penalty before Zoe Harrison broke two tackles to give the visitors the lead early in the second period.

A Stott penalty and Vanessa Temple’s 40-metre score handed the hosts a 13-5 advantage but after a Harrison three-pointer narrowed the gap to five, Nina Vistisen and Sonia Green dotted down in the final ten minutes to snatch victory for the Women in Black.

When Wasps and Harlequins met in pre-season a fortnight ago, it was Wasps who cruised to a 48-17 win but Quins got their revenge on the opening day as they edged a thriller 38-32 at Twyford Avenue.

Harlequins, who won the Women’s Premiership last season under the Aylesford Bulls umbrella, appeared to be easing to victory as the impressive Shaunagh Brown, Jess Breach, Holly Myers and Heather Cowell secured a four-try bonus point and handed them commanding 24-3 lead at the break.

But Wasps inflicted a second-half sting through prop Kate Hallett, Abby Dow and a debut try for Louise Dodds to narrow the deficit to just four points.

Myers and Breach crossed again either side of Dow’s second score to seal victory for the champions but Hallett barged over right at the death to earn Wasps a deserved two points.

The biggest challenge for the West Country side proved to be the traffic en-route to the Northern Echo Arena, which caused kick-off to be delayed by 45 minutes.

But once they arrived, Gloucester-Hartpury instantly proved they belong in the top tier as Ceri Large dummied her way over and Rachel Lund completed a fine line-out move on the cusp of half-time for a 15-3 lead.

Quick hands saw Beth Jones extend the advantage after the break, Lund’s second sealed the four-try bonus point and Milly Wallis was driven over by the forwards to complete the triumph – a lone Hannah Morton penalty was all the Sharks could muster.

In the final game of the weekend visitors Richmond ran in five tries at Cleve RFC and held off a second-half Bristol comeback to triumph 31-24.

An all-action first half saw Richmond lead 24-12 as Claire Phelps, Laura Kapo, Rebecca Ball and Jade Wong crossed the whitewash and skipper Rowena Burnfield powered over early in the second period to extend that advantage to 31-12.

England Under-20s star Lagi Tuima brought Bristol right back into the contest with two tries on debut to narrow the gap to seven points but the Londoners held on at the death to take the maximum five points.

Reporting thanks to the RFU