England's top four to face off

The semi finalists for England's top tier Tyrrells Premier 15s have been confirmed with games taking place on the weekend of April 13/14. 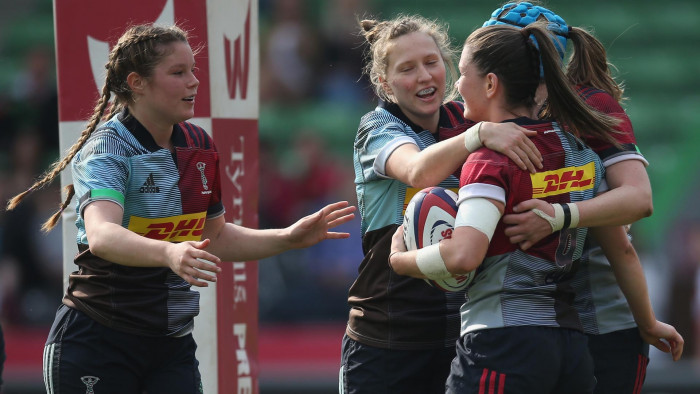 Champions Saracens finished top of the table after 18 rounds with 17 wins and their reward is a home semi-final where they will face a Wasps side who finished fourth.

The game will be played at Allianz Park on Saturday 13 April with kick-off at 15:00.

Harlequins, finalists last season, finished six points behind Sarries in second and will also have a home tie as they welcome Loughborough Lightning to Twickenham Stoop. This match will take place on Sunday 14 April with kick-off at 14:00

Harlequins sealed their home semi-final with a 62-0 win over Gloucester Hartpury, in front of a record crowd. The attendance of 4,837 at The Stoop is the most for a UK women's club game  exceeding the 4,542 who watched the team take on Richmond last year.

In a change to the format from last season where the semi-finals were played over two legs, the winners of these games will go straight to the final which is being played at Northampton Saints' Franklin's Gardens ground on Saturday 27 April.

Both semi-final games will be streamed live by England Rugby and you will be able to watch on Premier15s.com as well as on England Rugby Facebook and YouTube channels.