The England U20s management have lined up three games against France and Wales next year. The game against France will be the curtain raiser for the men’s U20 fixture between the same teams in Nantes. 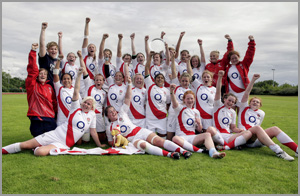 A new squad with 12 newcomers has been announced for the coming season with13 players named who were involved in the winning under 20s Nations Cup campaign last year.

Tom Stokes, the RFUW's Player Development Manager, said: "The international match against France will be a fantastic opportunity for the players and an excellent challenge. It will give them a taste of international rugby in a high pressured environment which will be an important part of their development on and off the field.

"The focus for the England Under 20s squad is about developing and preparing players technically, physically and mentally for senior international rugby. Charlotte Male and Marlie Packer have already been called up to the England A squad this season, and I am confident that there are several more players in this group with the talent and ambition to progress to full international honours."