English Premiership off to a flier

The English women's Premiership kicked off at the weekend with wins for Richmond, Saracens and Aylesford Bulls while Worcester and Lichfield played out a draw. 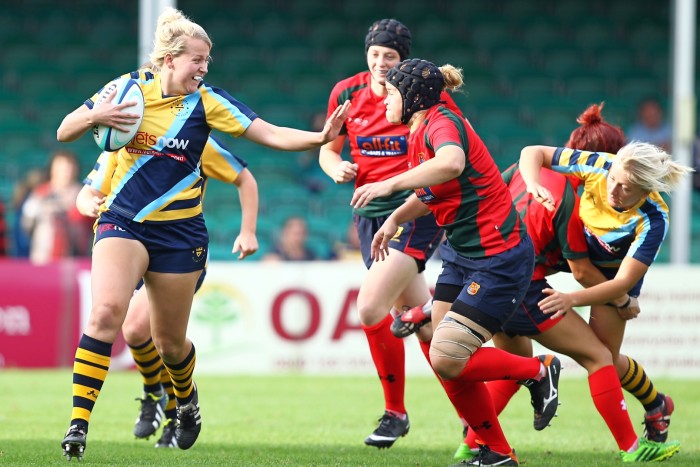 Defending champions Richmond got their season off to an excellent start with a seven-try win over Bristol to see them top the table at this early stage of the campaign.

Richmond are one of the sides to potentially suffer most from the newly awarded professional sevens contracts and with five of their six contracted players unavailable here, there was maybe a question of the unknown about the west-London side going into the game but that was quickly dispelled when they opened the scoring within two minutes.

Winger Oli Davies scored in the corner to set the early pace while experienced fly-half Alice Richardson grabbed the second a few minutes later. Another international player, Jo Watmore added a third on the half hour mark, converted by Richardson to give Richmond a 17-0 lead at the break.

Bristol hit back on halftime with Ireland’s Claire Molloy bursting through tackles to score and Rebecca Hughes converted to bring the visitors back into it.

The second half however proved to be a one-sided affair with Richmond running in four more tries; two more from Watmore, one for Hannah Field and one for Rowena Burnfield. With Richardson expertly controlling the game from 10, Richmond were always on the front foot.

Bristol’s Siobhan Longdon Hughes was a constant threat in the centre and made several breaks but was too often let down by her support.

This was a thrilling game which hung in the balance right up to the final whistle. Wasps kicked off their 30th anniversary celebrations by scoring first in this local derby with winger Becca Rowe dotting down and a conversion from Hannah Edwards put the home side up 7-0.

Having recently joined Saracens fresh from the USA’s World Cup campaign,  Emilie Bydwell used her experience to speed around the outside to score moments later, but the try was not converted and Wasps still led.

Saracens continued to attack with pace and a further try was scored by captain Maggie Alphonsi.

Wasps retaliated with another (unconverted) try from Rowe and a penalty from Edwards before halftime, putting the home side up 12-10 at half time.

The second half saw a continuation of the fast, dynamic rugby from both sides. Saracens made it over the try line twice, with scores from Lauren Cattell and another from Alphonsi for a 10-point lead.

But with just two minutes to play, Wasps worked hard in attack and their hard work in preseason paid off, with a try for Michaela Staniford out wide. Edwards converted, and ended the game Wasps 19 – Saracens 22.

Playing on the Sixways Stadium Pitch following the Warriors v Moseley encounter, the women’s midland rivals dished up a real feast of rugby for the 1000 fans who stayed to watch.

The home side’s opening pressure saw Lichfield concede five penalties in the first ten minutes with Megan Goddard cruelly hitting the post from wide on five minutes, but then punished the visitors for their indiscretions to give Worcester the lead with a well struck kick after 9 minutes.

The game continued at a ferocious pace and Worcester appeared to be in ascendency, however an excellent line break by Vicky Jackson gave Lichfield the lead, with Tash Jones adding the extras.

The home side came back with some exciting backs play with Lydia Thompson and Steph Johnston featuring prominently. It was no surprise when Johnson collected a clearance to feed Sam Bree, who showed great pace beating three defenders to put Worcester back in the lead.

Lichfield were awarded a penalty try after 26 minutes when the home side were judged to have not retreated after a quick tap and go from Mo Hunt. Sarah Nicolas, who had an excellent game at full back, converted for the visitors.

Lichfield’s power play through the centre, with Jackson asking searching questions, saw a further penalty to the visitors converted by Nicolas for a 17-17 score at the break.

Sam Bree intercepted quickly after the break for another score with Ceri Large converting but Lichfield once again hit back when Emily Braund drove over the line for the visitors with Nicolas again converting to bring the scores level which was how it ended.

Facing the only team they managed to beat last season, Aylesford Bulls targeted this game as a key battle and duly took their first points of the campaign with a hard fought win.

It was DMP Sharks though who started the better with the opening try inside seven minutes.

The Bulls were then repeatedly penalised at the breakdown, with DMP Sharks capitalising on the frequently undermanned rucks and constantly regaining possession. Eventually DMP's speedy winger touched down for her second try and this time converted to leave the score at 12-0 after 17 minutes.

But the hosts kept their heads up and fought back and after several tense minutes in the Bulls' 22 a third score for the Sharks was avoided when they knocked on near the try line.

Following gutsy defence and a turnover captain Catherine Spencer managed to break through the line and find winger Georgia Gray but again the try was elusive and the Bulls were penalised at the breakdown.

Finally a penalty by scrum-half Florence Williams sailed between the posts and left the half time score at 12-3.

Following the break the Bulls seemed to come back a bolder team. A more urgent defensive line speed combined with prop Caz Olwa powerfully clearing out rucks and flanker Liz Philp a strong contender at the breakdown led to more possession and ground gained for the Bulls. After another series of attacking phases, strong breaks and offloads by fly half Kelly Davies and Aussie centre Sarah Riordan, the Bulls got the ball to full back Debs Harwood, who sailed over the try line for the team's first try of the season, with Williams converting for 12-10.

The game was there for the taking and both teams gave it their all. At 55 minutes, hooker Jenny Vik was sent to the bin and the Bulls were down to 14, making the task all the harder.

But the Bulls ground their way up the pitch and narrowly lost out on three more points after Williams penalty shaved the uprights. But they were soon to take the lead after Riordan thundered through the DMP defence for a try between the posts, Williams converting.

With 15 minutes left on the clock and the Bulls 17-12 up both teams applied and felt the pressure, with further scores going to both teams; Williams gifted the Bulls another three points from a penalty kick at goal while the Sharks crashed over for an unconverted try on 75 minutes. The tempo was maintained into the dying minutes of the game, but Darlington were unable to regain their lead and the Bulls came out winners on 20-17.