The latest from the English Women's Premiership where Saracens are the team to beat with a two-point lead in the table over Richmond. 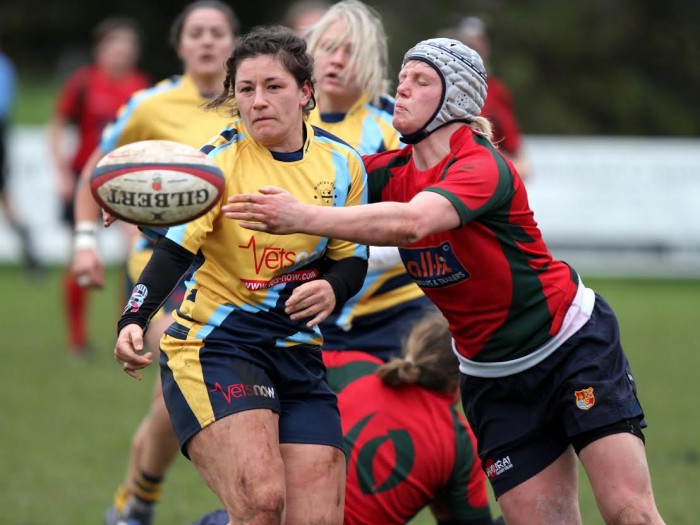 Image: Worcester and Scotland's Tracy Balmer gets the ball away in the game against Lichfield. Pic thanks to Rugby Matters

A dominant first half for home side Saracens was enough to secure a comfortable victory against a tenacious Wasps side at Allianz Park.

Wasps found themselves 12-0 down within the first fifteen minutes courtesy of tries from Hannah Gallagher, Lindsay Wheeler and the kicking of April Brown.

The home side's well organised set piece was too much for Wasps as they struggled to find answers to the work of the industrious Wheeler who scored again before the end of the half after hard work from the ever present Maggie Alphonsi.

Prop Olivia De Merchant added the home side's fourth try showing her physicality around the breakdown and burrowed under for her first score for the club and the accurate kicking of Brown allowed Saracens to enter in to the half time leading 24-0 to the better.

Wasps, however, came out into the second half with a new energy and sense of purpose. Jane Leonard showed her class with a continuous ability at disrupting the Saracens attacks, while Tina Lee, moving to fly half, began to orchestrate a threatening attack.

However, Wheeler and Gallagher had the final words for Saracens, mirroring their first half efforts and scored one a piece, while Brown converted her third kick of the game to conclude this fixture 36-0.

Wasps will take a lot of heart from their very strong second half performance as they look forward to an ever battling Aylesford Bulls, while Saracens will now face the tough challenge of the in-form Darlington Sharks team.

Lichfield started the brighter team in this game with their forwards making a big contribution to the first try of the day. Stacey Maguire charged down a 22 kick off, and Emily Braund broke through a number of tackles, to create an excellent platform for Lichfield’s back line to flaunt their skills, with full-back Sarah Nicholas scoring.

Worcester and England’s Rochelle Clarke was then given a yellow card at the scrum and the home team were able to capitalise on having the extra player with a try for Brand for a 10-0 lead.

Worcester then rallied, piling on the pressure and their efforts were rewarded with a try for full back, Steph Johnson, which Megan Goddard was able to convert.

On the stroke of half time, Worcester levelled the score with a well-struck penalty by Goddard.

Johnson scored a brace on 50 minutes with a searing run down the touchline from a well-worked midfield scrum move, putting them into the lead.

Lichfield’s captain, Vicky Jackson responded with a brilliant individual try, following a 40 metre run through and dance around the Worcester defence.

The away side dominated territory and possession, for the next 20 minutes however Lichfield responded with solid defence and were a constant threat around the breakdown. After holding up two Worcester try attempts, Worcester were awarded a penalty from the ensuing scrum, Goddard held her nerve to score the three points, taking them back into the lead.

Lichfield were not able to capitalise on the opportunities they dogged determination created in the final ten minutes and Worcester held on for a narrow win.

With three players away in Dubai with England, Richmond called up Kiri Lose and Jayne Goodliffe to make their first team debuts and both showed the depth of talent available to head coach Karen Findlay with strong performances.

Richmond opened the scoring in the second minute with Oli Davies storming over in the corner. Laura Jenkins added the second before Jo Watmore scored the third try in the opening 10 minutes, both converted by Goodliffe.

The fourth try was claimed by Lynne Cantwell after an excellent piece of back row interplay with Jenkins, Becky Essex and Tess Forsberg all taking a turn to offload to the other. Essex added another try a few minutes later before Watmore, Molly Kinsella and Forsberg added one each. Goodliffe kicked another three conversions to give Richmond a 50-0 lead at half time.

Never one to shy away from a try-scoring opportunity, Ellisha Dee added to the tally after half time. Debutant Kiri Lose got the 10th try, Emma Croker and Sara Anastasi adding the next 2 before Oli Davies added her second to the list. Goodliffe converted another 2 to give Richmond a 79-0 lead.

Aylesford kept trying until the end and were rewarded with a try from Megan Snape after Richmond went down to 14 due to an injury to Anastasi and no subs left on the bench.