Saracens stay top of the English Women's Premiership after a win over DMP Sharks but they are being chased hard by Richmond, who are just two points behind. 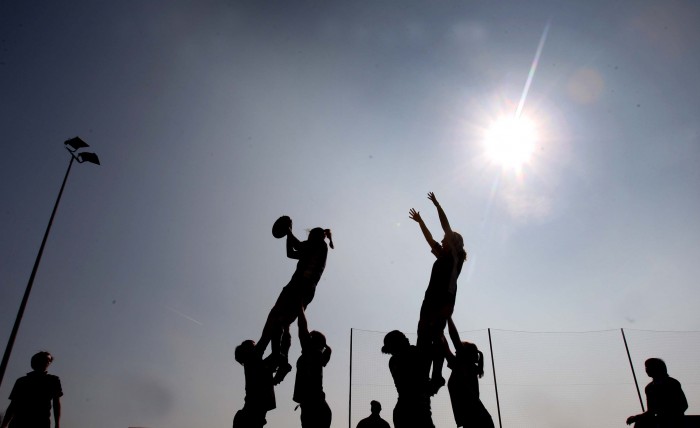 Saracens maintained their top spot on the league ladder after a 27-0 win over Darlington Mowden Park Sharks on Sunday.

Saracens were the first to score when a dominant scrum from the Londoners saw Sharks driven backward, and some quick ball from Leanne Riley allowed wing Stacey White score out wide.

White’s run ended there momentarily as she was sin-binned but the Sharks were unable to capitalise on the player advantage, and the last 15 minutes of the first half was a scrappy affair.

On the stroke of half-time, however, another strong scrum by Saracens led to Poppy Cleall charging down a clearance kick and scoring, helping Saracens to a 10-0 lead at the break.

It took 15 minutes for the first score after the restart to come, and again it was Saracens who broke the deadlock, Hilary Leith scoring from close range.

Sharks came close soon after with a great individual effort by Julie Hope. Yellow cards for Leanne Riley and Emma Lloyd then saw both teams reduced to 14 players. With five minutes to go though, Saracens’ White comleted her brace with a powerful run down the wing, making it a hat-trick moments later to secure the all-important bonus point.

Richmond kept the pressure on Saracens with an impressive 56-15 win over Lichfield, whose tough season continues.

Vicki Cornborough opened the scoring early on, with Jackie Shiels adding the extras, and both Richmond’s wings took their opportunities, Natasha Brennan and Oli Davies dotting down to hand Richmond an early 17-0 lead.

Lichfield hit back with a try from Saskia Brasier-Kobas, but the home side were not held at bay long, Elisha Dee scoring from a powerful run.

Shiels again converted before Brennan grabbed her second try to make the score 29-5 at half time.

Richmond started the second half as quickly as the first with American import Molly Kinsella running through two players to score. Forsberg quickly followed and then Joanne Watmore before Kinsella added her second to give Richmond a commanding 46-5 lead going into the last 20 minutes.

Lichfield hit back with a try from England scrum-half Natasha Hunt before Brennan secured a hat-trick. England No. 8 Harriet Miller-Mills added a consolation try for Lichfield in the dying minutes of the game.

Worcester and Bristol had to settle for an 18-18 draw at the weekend, the result keeping Bristol third in the Premiership table just ahead of Worcester.

Both teams had opportunities in the last minutes of the game to take the win with kicks at goal but strong winds made it a difficult day for the kickers.

Worcester dominated the early stages with Ceri Large running the game impressively. Despite this early pressure, the home side were unable to convert their territorial and possession advantage into points and the opening score came from Bristol. A lose ball during a home attack was collected by England full back Kay Wilson, who broke the line before passing to Katie Mason. She ran 60 metres up field to score in the corner. Amber Reed then added a penalty shortly after.

Worcester fought back with England prop Rochelle Clarke marshalling the forwards and on 36 minutes their persistence paid off with Tracy Balmer crossing the line to reduce the deficit. Lydia Thompson then added a second just before the break handing Worcester a 10-8 lead.

Into the second-half, Megan Goddard took advantage of Bristol’s mounting penalty count to add a kick at goal but by no means had Bristol given up. A powerful drive from England prop Sophie Hemming put the West Country side back in contention at 13-13.

Worcester took back the lead when a great run from Goddard was finished by Rhiannon Watkins, but once again Bristol pulled back the score with prop Sasha Acheson finding space to score with a powerful charge over the line.

With just five minutes remaining and the score at 18-all Goddard had a chance at goal for Worcester as did Reed for Bristol. Neither could convert and both sides had to settle for the draw.