English Premiership: Round one wrap

Worcester kicked the defence of their title off with a 13-try win over Aylesford Bulls while there were also wins for Wasps and Richmond, with Bristol and Saracens drawing in the opening round of the English Women's Premiership 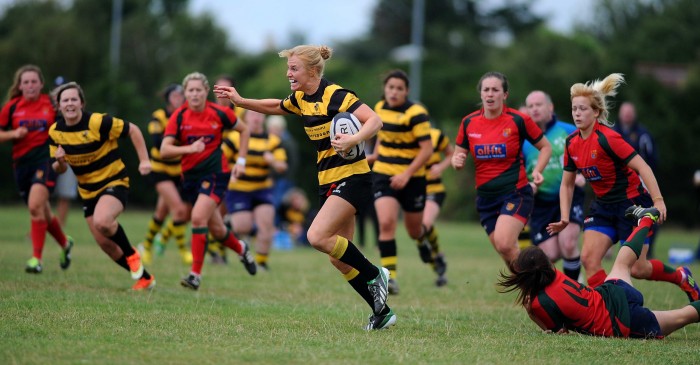 Pic: Wasps Micheala Staniford racing over for a try. Image thanks to Lee Crabb, Scrumpix Photography

Worcester got the defence of their Premiership title off to a flying start with a 77-12 hammering over newcomers Aylesford Bulls.

Wingers Kat Merchant and Sam Bree were the stars of the show during the 13 try win.

Bree was on the scoresheet within three minutes with centre Megan Goddard adding the extras for an early lead and Merchant was over a few minutes later after a good run down the blindside. Bree had her second quickly, racing over from 50 metres for the third score and then Kiwi centre Lisa Campbell was onto the scoreboard moments later with a well worked try following a partially charged down Aylesford kick. Merchant achieved a brace after just 30 minutes of play with an excellent line through the centres that surprised the Aylesford defence.

Before the break there were more scores from England prop Rochelle Clarke and flu half Ceri Large, with the extras from Goddard’s boot making it an unassailable 43-0 by halftime.

Worcester with a try from Scotland full back Lyndsay O’Donnell but Aylesford rallied and were rewarded with a try from hooker Jen Vik following good work by the forward pack. Fly half Florence Williams added the extras.

It didn’t get any easier for the home side, playing in their first Premiership game with Merchant and Bree completed their hat-tricks either side of a Goddard try.

Scrum half Bianca Blackburn added another butdDespite the sustained pressure from the visitors, Aylesford Bulls continued to attack and wing Harwood was unlucky to be denied a try when she was held up over the line. A good Aylesford scrum on the 5m led to Williams crashing over for Aylesford second try of the afternoon.

Worcester however finished the afternoon in style with another beautiful line from Merchant giving the wing an impressive 4th try and perfect start.

Wasps edged their opening home game against Lichfield in a narrow finish at Twyford Avenue.

Both sides featured a number of debut players, with Lichfield particularly happy to hand a first start to Sarah Nicholas (centre) who was playing her first game of senior rugby after progressing through the minis and juniors of Lichfield RFC from the age of five.

Wasps came back hard at Lichfield, camping in their own 22 and forcing the visitors on the defence. Wasps were awarded a penalty, which they took quickly and Vicky Fleetwood was yellow carded for the tackle having not retreated 10m. England centre Michaela Staniford, then ran through a gap in Lichfield’s disorganised defence to score a try to make it 7-5 at the break.

Wasps started strongly and Lichfield were forced into conceding numerous penalties. Staniford was causing problems for the defence and it was her break again that led to Wasps’ second try and she broke through the middle and used her pace to round the fullbacl and score. Hannah Edwards converted for a 12-7 lead.

It was Staniford’s turn to be sent to the bin next however. Lichfield’s Chelsea Fuggle created an overlap by off-loading to Fleetwood who raced 50m to be tackled 1m from the try line with Staniford yellow carded for an offence on the floor.

Emily Brund snuck through to score a try from the penalty and Hunt converted to hand the lead to the visitors.

With 20 minutes to go Wasps were awarded a penalty 40m out and Edwards slotted a fantastic penalty to give the home team a one point advantage. Lichfield had a chance to win it with a last minute penalty but Jackson was just wide.

The first game of the season saw Richmond welcomed to DMP Shark's new home at the Northern Echo Arena, an excellent venue with the perfect surface for the brand of rugby both sides were looking to play. There was a 'first day of school' feeling to proceedings with each team suffering from early season jitters and a few handling errors creeping into play. Richmond stated their intent early with Becky Essex powering over from the back of a scrum 5m out; 0-5.

The next 15 minutes saw lots of back and forth between the teams, with former Richmond scrum half Fi Davidson pairing up with Katy McLean at 10 and causing trouble for her previous club. After a short injury break to tend to a DMP's Georgina Roberts, another powerful Richmond scrum gave the pack a chance to push over, with Becky Essex again taking the credit.

The away team’s third try came courtesy of Holly Myers, with a storming run from the left wing on halfway, finishing to the right of the posts. Jackie Shiels converted; 0-19.

Half time came with Richmond in the ascendency, but DMP started the 2nd half stronger with some excellent runs from their backs. Only a try saving tackle from Richmond fullback Oli Davies, returning after a 3 year absence from Premiership rugby, stopped Katy McLean scoring. The Richmond defence rallied to deny DMP a score that looked certain.

DMP continued to push hard, but the Richmond team defensive line remained solid and it was the Londoners through Becky Ball who were next to score against the run of play, Abi Chamberlain grabbing the extras; 0-26.

Richmond secured the bonus point thanks to Emma Croker, who showed her strength in reaching for the line despite being stopped short, again converted; 0-33.

DMP showed their commitment to playing a fast game with Fi Davidson nipping through to score from the back of a ruck.  They were to have the last word in the match taking the final score to 5-33.

Saracens welcomed Bristol to their new home ground, Allianz Park for the opening game of the new Premiership season. As kick off approached, the dark skies gathered and the storms came in. For almost the entire 80 minutes, the game was played in torrential rain and sleet, which unfortunately had an impact on the flow of the game.

Bristol's Sasha Acheson looked great in the opening exchanges and made some storming runs. The game was played in the middle half of the pitch as error counts on both side mounted up in terrible conditions. Eventually, Acheson got on the end of some strong inter linking between forwards and a great run by Welsh centre, Rebecca De Fillipo, to barge over from close in. Amber Reed was short with the conversion.

Saracens continued to press to the corners with some great kicking from the excellent Sarah Mckenna. Eventually space was made for Sally Tuson to power her way over against her former club at the stoke of half-time to make it 5-5.

The game continued on a knife edge as both sides attempted to inject some tempo in to the game and make some headway. Bristol's back row of Molloy and Noel-Smith was lively at the breakdown, however, Saracens met every challenge, in which the returning Maggie Alphonsi was outstanding throughout with her trade mark hits and turnovers. Saracens began to get the upper hand in the set piece made way for a drop goal opportunity in the final play, which was charged down to keep the scores set at 5-5.