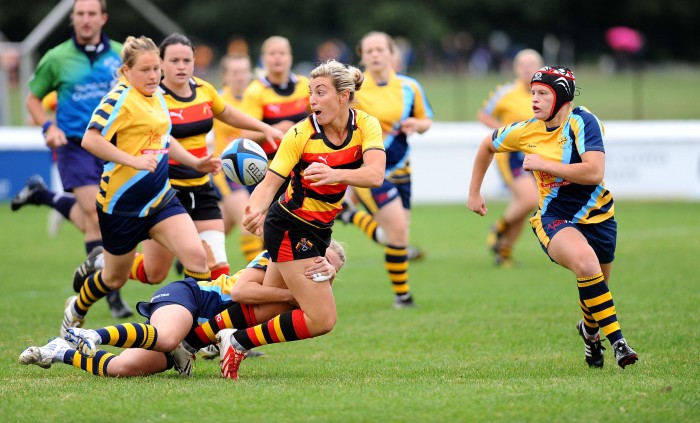 Image: Richmond's Alice Richardson offloads in the win over Worcester. Picture thanks to Lee Crabb, Scrumpix.

Richmond made a dominant start in the fixture between last season’s top two, with Annabel Sergeant scoring after just a few minutes of play.  Alice Richardson, making her first league appearance this season, broke the line and passed to Sergeant who brushed off tackles to score under the posts for the lead.

The rain affected the handling for both sides and despite dominating early possession, Richmond found it hard to build on their slender lead. The home side gave away a number of penalties in quick succession allowing Worcester to gain the upper hand. Kat Merchant, made a charging run down the right touch line, handing off two players as she went over in the corner. The tricky conversion slid narrowly wide to make it 5-5 at half time.

Laura Jenkins got on the scoreboard for Richmond early in the second half and Abi Chamberlain slotted the difficult extras to make it 12-5.

Worcester then lost Rochelle Clarke to the sinbin following a great break from Oli Davies and Hannah Field, and the home side’s third try came courtesy of Richardson who exploited a gap and touched down under the posts. Jackie Shiels converted; 19-5.

The next score came when Worcester were in possession in their own 22.  Shiels put in a thunderous tackle 5 metres out from the try line displacing the ball in the process.  Richardson picked it up off-loading to Watmore who scored under the posts.

Worcester had the last say with a strong period of attack and the ball was spread from one wing to the other with Steph Johnson the final recipient.  She touched down in the corner before centre Megan Goddard converted taking the final score to 26-12.

Lichfield suffered their second defeat in a row in their first outing at home this season.

Though slightly depleted at the moment, the home side started the game very well, with a few handling errors preventing them from opening the scoring.  Natasha Hunt got them off the mark with a penalty for the early lead.

DMP grew into the match and eventually broke Lichfield’s defence with a well-executed backs move off a scrum. Julie Hope went over in the corner for the first try. Lichfield responded almost instantly from the restart with a terrific break from Hunt. A couple of phases later and prop Justine Lucas touched down to take the score to 8-5 in the hosts’ favour going into half time.

The style of the first half continued into the second half, with Lichfield struggling to keep their error count down and Sharks enjoying the majority of the possession. The visitors’ hard work eventually paid off with a penalty, which Mclean slotted to bring the sides level with 25 minutes left to play.

The home side responded with a section of good play and kept Sharks on the back foot with a number of penalties. However, it was the Sharks who profited next from another two penalties, again kicked by Mclean. This took the score to 8-14.

In the final minutes of the game, Lichfield piled in to attempt a recovery but again failed to retain the ball and, with no one home, DMP booted the ball downfield. Sharks’ Katy Green chased the kick with impressive speed and her efforts nearly went unrewarded thanks to a fantastic cover tackle from Lichfield’s Carys Williams. Shark Jen Edwards, however, at hand to collect the offload and touch down for her second try of the game. Mclean converted to take the final score to 8-21.

Newcomers Aylesford Bulls are continuing to find life tough to adjust to in the Premiership as they suffered another large defeat, this time at the hands of Saracens.

The scene was set early on when the lively Ama Ofkar crossed in the opening three minutes following some fine handling in the backs. Despite the hard work of the ever present Catherine Spencer, who was a nuisance throughout for Saracens, the sheer physicality and experience of the home side was too much as they overwhelmed Aylesford Bulls, taking the score to 55-0 by half time.

Aylesford re-regrouped at the half and showed some nice control in the lineout and scrums and stopped the onslaught  of the black tide, however, the running of Poppy Cleall and Lindsay Wheeler caused havoc at times, exploiting the space for the excellent Sarah Mckenna on too many occasions to take the final scoreline to 96-0.

Bristol picked up their first win of the season, after a draw with Saracens last time out, by beating Wasps at home in poor weather.

A well drilled Bristol side held onto possession early on in the game, however when Wasps got ball in hand, the visitors looked threatening.

Bristol however opened the scoring, with a break away from their Welsh centre, Rachel De Filippo, leading to a try under the posts which was not converted.

A further two tries from Amy Wilson-Hardy and Sian Moore in the first half put Bristol up 19-0 ith the conversions added by Amber Reed.

Wasps defence was solid for the majority, however when attacking, structure was lost at times, leaving them unable to capitalise on their possession.

The second half saw Wasps finding some form and some threatening runs and good work from the forwards led to a try from Charlie Veale.

The conversion was added by Hannah Edwards to reduce the gap.

Wasps fly half La Toya Mason kept Wasps pushing forward throughout the second half, however, with the wet conditions, neither team were able to put any points on the board in the closing stages of the game.