The second leg of the European Sevens Grand Prix will be very different to the first as teams call up the 2020 generation. 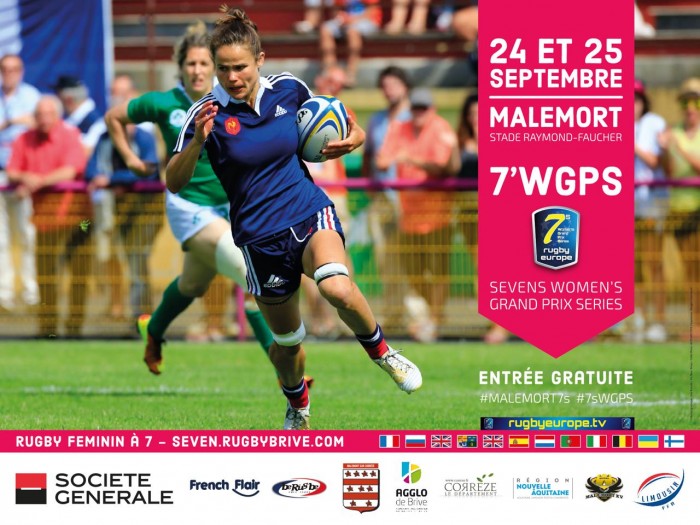 The first leg of the 2016 European Grand Prix in Kazan was just three months ago, but it might as well have been in a different age and a different era. Back in June seven of the teams were preparing for the final Rio qualifier, or even the Games themselves.

Now, the Games are in the past. The Great Britain squad no longer exists, despite their having two teams in the tournament, and overall nine of the unions have next year’s fifteens World Cup in mind, or the qualifier next month, with many of the players from Kazan now switched back into the longer game.

As a result, most of the leading squads are very different to those of three months ago, with many of the teams using the opportunity to call up young players likely to be competing for places in Tokyo in 2020.

France’s attitude to this tournament is no better demonstrated by the fact that there is a full round of Top 8 games this weekend, despite the fact that they are the hosts, and reigning champions.

Injuries to Marjorie Mayans and Jessy Tremouliere would have required some changes anyway, but only two players from Rio will pull on a French shirt this weekend – Jade le Pesq and Rose Thomas, who captains the team. Eight of the rest of the squad have played for France (at 15s or 7s) before, and Le Duff was a Rio reserve, but there are two new caps (Charlotte Torres-Duxans and Andréa Marcial) and overall this can only be described as a very experimental team.

However, it is a team with huge potential. Torres-Duxans and Marcial come straight in from France’s exciting U18 squad, which won the European title a couple of weeks ago, while young players such as Neissen, Okemba and Amedee are already familiar faces.

The only snag is this team has never played together before. They should get better as the tournament goes on but will need to avoid early banana skins.

Rio quarter-finalists Spain have, with World Cup qualification the main concern of the next couple of months, gone for youth in a big way. Spain have a reputation for fielding squads with an above average age, but not this time. Five of their twelve come straight in from their U18 team (Ingrid Algar González; Maria Calvo; Anne Fernández De Corres Del Rio; Olivia Fresneda Fernández and Carla Rodriguez Martínez), which topped their pool and went on to reach the semi-finals. This is combined with some more familiar faces, such as Marina Bravo and Patricia Garcia, creating a very interesting team that could form the core of Spain World Series team later this year.

As with France, the key will be how quickly this team will gel. However many of the players are clubmates or will have played together at regional level and there is a good chance Spain could at improve their sixth place in Kazan.

Despite their very realistic hopes for success in the fifteens World Cup qualifier, the Netherlands have still selected a strong and experienced sevens team for Malemort. Many of the big names from their World Series days have now moved on, but players such as Hielckert, van Rossum, van Meer, IJdens and Selbeck will be still very familiar to followers of the Orange.

There is little experimentation here, the team know each other well, and as a result the Dutch could be a real contender in this tournament. Luck in the pool draw has rarely been in their side, but in this case against two highly experimental teams and 12th ranked Finland the Dutch must fancy their chances – and with some real justification.

Finland will be unconcerned by World Cups and other distraction. On the contrary, this is their big event – and avoiding relegation with be uppermost in their minds.

Coming straight into the tournament from their domestic season will be another bonus and they could achieve some of their best results at this level. The Finnish XVs league has just finished its regular season with the final - between Helsinki and Tampere - taking place after this tournament. This season's top points scorer - Anna Soiluva from Tampere - has scored 133 points, including 17 tries, in nine club games this season and will be a key player this weekend

Finland are targeting a quarter-final place, which in ambitious requiring them to win at least one pool game. Even with France and Spain being weaker than in Kazan this will be a tough target.

Beaten finalists in Kazan, with their main rivals largely stripped of their most experienced players, Russia start the tournament as clear favourites as the only one of the leading teams in the series to field more or less the same squad as Kazan.

Indeed, if anything Russia are stronger as they are fielding the team that they would probably have wanted three months ago. The absence of Kudinova, especially in Dublin, was possibly the difference that saw Russia fail to reach Rio.

A curious hangover from Rio sees Wales play as "Great Britain Royals" this weekend - basically because the Kazan leg was used as a Rio warm-up, and teams (it seems) cannot change their name mid-competition, although as Wales were always going to inherit GB Royals series points and position its hard to see why that was a problem. The only practical difficulty might have been that, while several Welsh players played for the Royals in Kazan, Jasmine Joyce played for the Lions - and switching players midstreammight have been trickier. However, Jaz is not travelling to France this weekend.

It is often forgotten, but Wales have a an impressive history in European sevens, having won the title in 2006. Indeed they are one of only two teams who have won continental sevens titles, but never appeared in the World Series (the other is Kazakhstan). They go into this weekend as the highest ranked non-World Series team in the tournament and it it is no exaggeration to say that , if the WRU put some investment into the team over the next year, a place in the World Series from 2017 is well within their capability (although the distraction of the fifteen World Cup may delay that). A place in the 2018 World Cup is also a feasible target, and the first step to that is a good result here and the ranking that goes with it.

Joyce's absence aside, the squad looks strong enough to achieve at least a top six finish, and maybe better than that depending on how the quarter-final draw goes.

João Mirra's team finished in eighth place last time which was, perhaps, a little disappointing for an ambitious squad who remain frustratingly inconsistent. However with several teams resting key players this could be their moment as they should qualify for the quarter-finals from this pool, with their game against GB Royals/Wales being the key fixture,

Likely quarter-final opponents could include Italy, France, Netherlands and Spain. Portugal's record against Italy and the Netherlands is quite good - even when they are at full strength - while the experimental French and Spanish selections could slip up if Mirra's selection plays as well as it can.

After 11th place in Kazan, the yo-yoing between divisions faced by the Ukrainians looks likely to continue. Unlucky to draw the strongest looking team in Malemort this weekend, Ukraine will be doing very well to avoid the Bowl again,and then the drop. That said, it seems highly likley that they will be back again in 2019.

The problem seems to be that Ukraine have all the skills and handling needed do well in the second tier, but have never quite adapted to the more physical power game played in the top divsion. As with many teams in their position, they need to play more, but visiting the top table only once every two years inevitably tends to show how far and how fast the leading teams are accelerating away from the rest.

England name a squad with plenty of experience with four returning Olympians with Abbie Brown, Alice Richardson and Amy Wilson Hardy, who captains the squad, returning.

The side will also feature a number of new names. Lotte Clapp, Lauren Cattell and Katie Mason, who all played in the 2016 Six Nations, join Lucy Nye, Kelly Smith, Millie Wood and Rachael Woosey in making their debuts on the senior sevens circuit. Natasha Brennan, who has been a member of the England Sevens programme since contracts were first awarded in October 2014, completes the squad.

While England players were part of two mixed GB squads for the first leg of the series in Kazan, Russia, England will now play as GB Lions and Wales will field a squad as the GB Royals.

The Irish include two new caps, Chloe Blackmore and Katie Heffernan, who have both come through the Under-18 player development programme - both players competed at last year's Rugby Europe Under-18 Sevens Championship where Blackmore was team captain.

Ahead of the squad's departure for France IRFU Director of Women's and Sevens Rugby, Anthony Eddy Eddy said: "There is a good balance to the squad that has been selected for this weekend's tournament in Malemort.

"Ten of the players who have been selected competed in the World Rugby Women's Sevens last season, so they are all aware of what is required to do well at a tournament such as this.

"We then have two new caps in Chloe Blackmore and Katie Heffernan. They have both come through the player development pathway and are very promising players.

"We're in a challenging pool with GB Lions, Italy and Belgium, all of whom will have their own strengths, but the squad have had a very positive pre-season and have been training hard, so they are all looking forward to getting back onto the field and competing."

With no Autumn tests, Italy do not have the distractions of most of the other World Cup teams and so are able to select most of their top players for this event. Two thirds of the squad is the same as Kazan.

Although the Italians prioritise sevens less than just about every other major European nation, winning the bowl with wins over only Belgium and Finland would have been the very least of their aspitations. Given the roll-call of leading Azzuri coach Marco di Rosso will be hoping for more this time.

Belgium are at full strength for this event, despite 15s World Cup distractions, as their place in the Grand Prix is at risk after a disappointing 10th place in Kazan with only a win over Finland. They are again drawn with Italy and Ireland, and its a good job that they have been able to name this team as these pool opponents appear to be as strong as they were in Kazan.

The Belgians have the ability to spring a surprise - they nearly upset Ireland last time - so are not be be underestimated. Three players from French 7s champions Lille stand out in the squad, but there is plenty of strength and ability elsewhere. Ten of the squad come from just three clubs, including four from domestic champions Boisfort.