Ireland opened the third round of the World Series in Las Vegas yesterday with a shock win over the USA, but that was the highpoint for European teams who continue to struggle in the World Series. Elsewhere a third Ferns win in three against Australia suggests the crown is moving back across the Tasman. 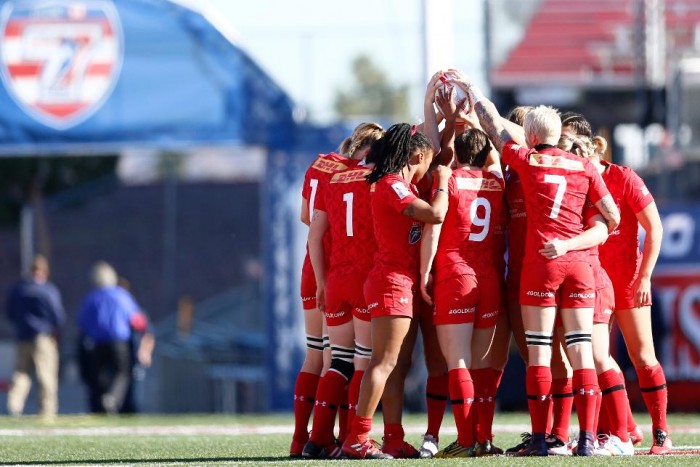 The problems for European teams highlighted on Day Two in Sydney continued on the opening day of the Las Vegas Sevens. After Ireland’s crowd-silencing opener against the hosts, the only European wins came against each other or South American opposition. Of the continent’s five representatives, two failed to make the quarter-finals, and two more only achieved a berth in the last eight as best third placed teams. Only Russia achieved the heights of pool runner-up.

The clash with Six Nations has a lot to do with this, though that only affects England, France and Ireland – and the latter even prioritised this weekend, a policy that seemed to pay off, at least at the start of the day when Ireland came from 21-12 down to score two tries in the final three minutes to record a famous win over the USA. Fellow Europeans Spain seemed inspired by this and came within an ace of upsetting Fiji in the next match, a single missed conversion being the difference between the two sides.

But that was the highpoint of Europe’s day. Spain and Ireland failed to find their morning form when the played the reverse fixtures against USA and Fiji in the afternoon; France and Russia were well-beaten by Canada, and England began brightly in their games with Australia and New Zealand, but lost both games by comfortable margins.

Nonetheless the match of the day was the all-European clash between France and Russia – arguably the continents greatest rivalry at sevens – where France came within a hairsbreadth of overturning a 22-0 score at half-time, with Lina Guerin being tackled inches from the line on the final play giving Russia a 22-19 win.

But if Europe was having a day to forget, it was a bright day for North America and Oceania. Canada strolled through Pool A, which ended with the highlight of Ghislaine Landry drawing level with Portia Woodman at the top of the all-time points scorer list. Her three tries and six conversions were at the heart of the Sydney champions imperious opening day. Their North American rivals and hosts the USA also made the quarters, though not without some drama with the loss to Ireland and a tight win against Fiji.

That defeat aside Fiji are starting to consistently show the form we all suspected they might have. Pool winners again they will feel themselves unlucky to have drawn Australia in the last eight, but look strong for fifth place - again.

As for the champions – has their crown slipped? A third defeat in three games to New Zealand in this year’s series suggests the Ferns are back at the top of World Sevens.

And so to Day Two which will open with the Challenge semi-finals, including a crucial game between Brazil and Spain. The trapdoor is beginning to open and these two are now teetering on the edge. Whoever loses will become favourites for the drop. England play Argentina in the other Challenge semi-final.

The quarter-finals include two repeated pool games – Canada v France and USA v Ireland – plus the all-Oceania tie between Australia and Fiji, ending with New Zealand against Russia. It has to be said that European chances of a semi-final spot do not look good, with a trans-Tasman or a repeated all-North American final looking very possible.