The European Sevens Grand Prix will be decided this weekend in Kazan. France are in poll position, but Russia, Ireland and England are still in the running for the title. 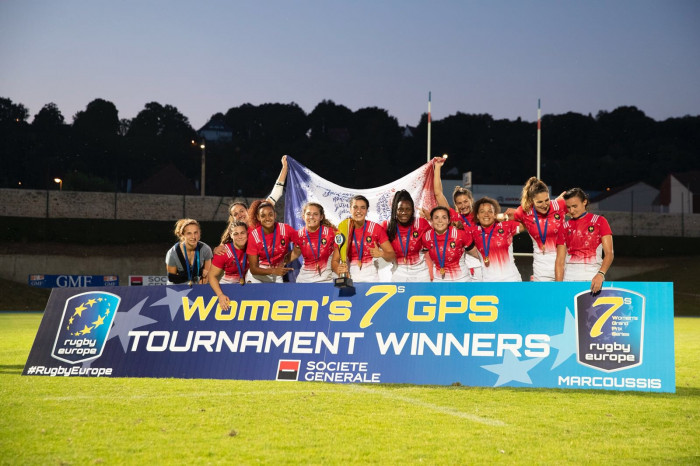 For the third year running a crowded calendar means that the climax of the European Sevens Grand Prix takes place in September, better than two months after the first leg, and after the new season has begun. While unavoidable it is far from ideal and does perhaps result in a certain feeling of anti-climax, not least because many of the leading teams tend to use it to experiment with new players and formations ahead of the World Series.

This tends to devalue the overall competition as well as making a bit of a lottery out of the seeding, which in turn can impact on the relegation battle. Germany, Portugal, Poland (and even, mathematically, Italy) are far from safe from the drop.

In addition there are three places in the World Series qualifier in Hong Kong for the top three sides not already in the series – and with perennial qualifier finalist South Africa out of the mix this could be the year that a sixth European team makes the grade. Belgium, Wales and Scotland currently fill these places and the highest placed of the three will also receive an invitation to one round of this year’s series.

France were winners of the first leg thanks to a more dominant 17-12 final win over Russia than the scoreline but their squad this time around is based around their World University Championship team with Six Nations winning captain Gaëlle Hermet getting her first taste of senior sevens alongside fellow student champions Maëlle Filopon, Valentine Lothoz, Ian Jason and  Joanna Grisez. None of the regular WSWS players are present and a place in the final this time around seems unlikley.

Russia: Squad yet to be published

Ireland: Ireland previewed their "shock" first round win the World Cup by beating England a few weeks before in the first leg in Marcoussis to take third place. Four teenagers - Megan Burns, Anna Doyle, Brittany Hogan and Emily Lane – take their first steps in international rugby this weekend. Burns and Doyle were both part of the Ireland U-18 Sevens squad that won the Home Nations Series in the summer and also picked up a bronze at the European U-18 Sevens Championship in Vichy in April. Lane captained Ireland to gold at the UK Schools games last year and she and Hogan lined out for the Ireland Development side at the Dubai 7s Invitational competition last November.

Stan McDowell will coach the side in Kazan and he is looking forward to seeing how the new-look team performs, saying; "It's an exciting week for the players coming in for their first caps. They have shown their talent over the past number of seasons at underage level and have earned their opportunity to wear the Ireland senior jersey.

"They will have lots of experienced players around them in the squad, as the eight capped players have all played at World Series events and have been part of the programme for a number of seasons."

England have followed a similar path with coach James Bailey using the tournament to blood the new recruits to the national squad. Lizzie Adam, Abi Burton, Ellie Kildunne, Celia Quansah, Emma Hardy, Helena Rowland and Emma Uren are all named in the 12-player party, though Adam and Quansah, alongside teammates Shauna Bennett and Sophie Tandy, formed part of the squad that travelled to Marcoussis earlier in the summer, losing to Ireland in the bronze medal final.

Joining them is Garnet Mackinder who made her England Women’s Sevens debut alongside Tandy in the final leg of the 2017 HSBC World Rugby Women's Sevens Series in Clermont-Ferrand.

Bailey said: “Our priority for this season is Olympic qualification so we want to ensure that our squad is in the best place possible for the first World Series tournament in Colorado in October.   Kazan provides us with a great opportunity to develop our younger group of players as we prepare them for playing on the world stage as well as continuing to build depth within our squad. The standard of the European competition is incredibly high so this weekend will be a really big challenge but will play a pivotal role as we look ahead to next season.”

While the elite five have their sights set on greater things, for the rest this is a vitally important weekend. Wales are particularly well-placed to benefit having finished an impressive fifth in Marcoussis this could be their year if they can repeat that performance in Kazan. Nothing is certain with a tricky set of pool opponents – Russia, Scotland and Portugal – but if they should make the quarter-finals after which, given the experimental nature of some opposing squads, anything is possible.

"Our preparations for the last leg in Kazan have gone well," said head coach Jonathan Hooper. "We are very much looking forward to the start of the tournament. The challenges that we'll face on day one are very exciting. Scotland gave us two tough games in France, Portugal will be a new challenge for us and playing Russia in their home tournament will be a great test."

Experienced duo Hannah Jones and Jaz Joyce are named co-captains once more, with Alex Callender and Angharad De Smet the new faces in the team.

Another team looking to take advantage of absent star names is Belgium. Sixth in the first leg they might have expected a tough route to the quarter-finals having been drawn with Spain and France in Pool A, but coach Guillaume Mundele has been able to select near to his strongest possible line-up which will prove a real test for their more illustrious opponents, including two players from the World University bronze medal team (Blondiau and Claes).

"What motivates us is to go back to Hong Kong, what inspires us is to be invited to the World Series" said Guillaume Mundele.

Scotland impressed in Marcoussis to reach the quarter-finals and an eighth place that would be enough to send them to Hong Kong for the first time if they can repeat that in Kazan.

Coach Scott Forrest has named a strong squad with nine Scotland Women XVs caps are included, eight of whom played in the 2018 Women’s Six Nations. Helen Nelson, who is named as captain alongside Lisa Thomson her - both recently signed 2021 contracts with Scottish Rugby and offer experience to the group.

Sister of captain Bryony Nelson would win her first international sevens cap if she takes the field while centre Hannah Smith returns to the squad after missing the first leg in Marcoussis, Paris, through injury. U18 Evie Wills has also been named after impressive performances at age-grade level.

“We are in a very positive place going into the second leg”, said Forrest. “I’m pleased with the effort every member of the training squad has put in and there’s a really good balance to the travelling team. Paris was the first taste of this level of sevens for a lot of our squad, so we’ve learned from that and will be aiming for a strong start.

Italy start the tournament with a chance of both glory and disaster. They are just outside the Hong Kong places, but are also – mathematically at least – in the danger zone for relegation. And, for the first time in nearly a decade, they have a new coach.

"I am very excited”, says Alfredo De Angelis, coach of the Italian sevens. “It is a great opportunity to train the Italian women’s team. The girls are very motivated and we want to put right the performance of lights and shadows we showed in Marcoussis. We have a difficult group, but I'm sure the team has the right qualities to do well in Russia ".

De Angelis also mentioned "transfer of duties" with Andrea Di Giandomenico, the former coach of the Italian team and now Technical Manager: "My relationship with Andrea is long-standing. We have known each other for over twenty years on the rugby field. We have shared many good experiences both from teammates and opponents and the relationship is still more than optimal. "

After bursting onto the scene with a memorable 2017 performance, 2018 has been rather tourgher so far for Poland who are now one spot away from relegation back to the Trophy. Drawn in Pool C with Ireland, England and Italy it will be tough for them to make the quarter-finals which could result in a very nervous second day. Eight of the 14 players named in the trainng squad are from one club - Biało-Zielone Gdańsk.

Portugal have never played outside of the top level of European Sevens, and need to significantly improve on their 11th place in Marcoussis if they are to keep continue their 15-year run at the top. That has put them in Pool B which promises to be the toughest and most unpredictable in Kazan, likely leaving Portugal fate hanging the balance of the Challenge semi-finals on Sunday morning

Finally Germany have the toughest task to stay in the Grand Prix, almost certainly needing to make the quarter-finals to do so. Their squad has not been published.

The tournament, which will be live streamed on RugbyEurope.tv, and play starts at 10am local time (BST+2).