The European Trophy – Europe’s second level XVs tournament - is back, and this time with (at least) six teams. 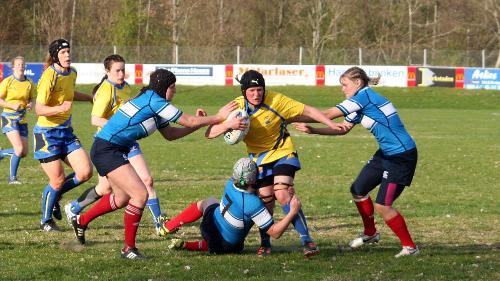 The 2019/20 European Trophy can to a halt with two games unplayed in early 2020, but nonetheless it still had a champion as Czechia had beaten the other three teams and could not have been caught even if the missing games had been played

The same four teams – Czechia, Finland, Sweden and Switzerland – will play in “Pool A” of the the 2021/22 Trophy, which kicks off this weekend as Sweden travel to Finland to kick off a tournament that – thanks to a winter break - is scheduled to take seven months to play out.

But perhaps even more exciting is that there will be a Pool B, which will feature teams returning to international fifteens after some years away – in the case on one 26 years away.

At the moment this initiative by Rugby Europe includes Portugal (who last played in 1995) and Belgium (last test 2018), but they could yet be joined by other teams, with the informed speculation leaning towards Germany (last test 2019) and Romania (last test 2008).

At present “Pool B” appears to be envisaged as being a structure within which these returning teams can play, rather than a formal competition.

The 2019/20 tournament saw the return to competitive rugby of Sweden, who prior to that had not played in a Rugby Europe even for over six years. With them kicking off the season’s competition we spoke to team manager Jonas Toresäter about women’s rugby today in what was one of the world’s pioneer rugby nations (they played their first test in 1984 – four years before England).

We began by talking about the challenges faced by the game in Sweden today.

“General challenges are the same as for everyone else I guess”, said Joans.”Lack of funding, not enough clubs and players to enable competitive rugby on a higher level, the most ambitious players move overseas for better rugby, other sports like handball and ice hockey attracting the athletes we want, etc .

“What's special for Sweden is that winter conditions don't allow outdoor rugby between November and April, meaning we are forced into off season when everyone else (except the Finns and the Norwegians) have their competitions. Our short season, April-October (with a summer vacation break July), means there is limited space for everything that must happen during this short season - 7s and XV, domestic and international.

“Yes, I think numbers are growing, but slowly.”

Sweden had only just returned to competitive international rugby when the COVID struck. What effect did the shutdown have on women's rugby in Sweden?

“Yes, if we are talking about XV a completely new management team that came in place 2019.

“I think we were lucky to have this new management under the leadership of Claire Cruikshank when Covid struck. We had time to build new structures and a more professional team culture around the WXV National Team. We have also worked hard with implementing a S&C programme and had numerous and regular meetings with the squad and in management to plan and prepare for the return of international rugby.

“If we are looking at the NT squad at the time when Covid struck, about half the number has left the squad during the shut down of rugby. Mainly due to lack of commitment and motivation, which is easy to understand given the circumstances.

“However, the outcome of this situation is a transformation of our NT set up into a highly motivated and more professional team culture. Our coaches have had the opportunity to build "their own" squad and a great number of new players, both young, talented and experienced, have entered the squad.

“In Sweden we were also able to go through with the domestic league 2020, a few clubs pulled out, but still. So most of our players had competitive rugby 2020.

“So, in conclusion, I believe we walk out of the covid period stronger than we were before.”

What preparations have you made for the European Trophy?

“In addition to the above, we have had four training camps in Sweden during July to September. The early ones worked as trials for new players and the last two were regular NT camps for the squad of 40 players selected for the NT Training Squad.”

What do you know about your opponents?

“We have played against Finland as well as the Czechs several times in the 7s European Trophy 2019 and 2021, and we also played both nations in RE XV Trophy 2019, so we know them quite well.

“The Finns have some really powerful and skilled players so Finland has our greatest respect. We are aware of the Finnish "sisu" and expect a really tough battle in Helsinki.

“The Czechs have made remarkable progress with both their XV and 7s Women's teams the last couple of seasons. We lost to the Czechs XV in Prague 2019 and their 7s team got promoted to RE Championship following this summer's Trophy tournaments in Zagreb and Budapest. We know the Czechs will be a great challenge to us and we are really looking forward to measuring what our current team can do against them.”

Sweden have been playing international rugby longer than almost anyone else in the world, and played in the World Cup as recently as 2010. Is this long tradition a help or a hindrance? Are many of the former players involved with helping the new team?

“I don't think it is a hindrance. Most of the players in the squad today are too young to experience any pressure from our "golden days" if that is what you are thinking of. Everyone knows international women's rugby has developed hugely since 2010 and it is not realistic that Sweden should be able to keep up with the big rugby nations - considering our financial situation and our number of players.

Finally, are there any players in the squad that we should particularly look out for?

Vic Petersson, flyhalf. Moved back to Sweden this spring after three years in Harlequins, with appearances in both their 1st and 2nd team. Captains Sweden's successful 7s NT.

Also worth mentioning is 12 of the players in the match day squad earn their first caps against Finland. Two of them are youth talents Sonia Smolina and Tess Proos born 2003.