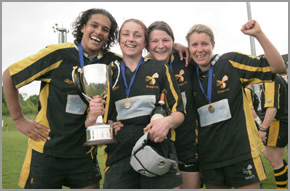 Helen has dedicated her whole playing career to Wasps and was cheekily presented with a zimmer-frame to commemorate the momentous occasion.

Helen shocked her parents in her teens by announcing that she was going to play rugby, her mother said I nearly had a heart attack, I couldnt get my head around it, Id grit my teeth and watch, just worrying in case there was an accident.

Helens parents watched as she joined the women at the Sudbury-based London amateur club, following in her fathers footsteps, and they recall the women to be a novelty to begin with, but always a close-knit team, who were well supported within the club.

Helen gained the first of a clutch of caps during the 1994 World Cup, scoring in front of a crowd of 3,000 against Scotland. However at scrum-half Helen faced fierce competition with the likes of Emma Mitchell, Susie Appleby and Jo Yapp dominating the English scene.

This did little to dampen her enthusiasm for rugby at Wasps where again this year she has led from the front, helping the second team win promotion to Premiership 2 level while providing help when needed still to the club's first team squad. Both teams remain inspired by Helens game knowledge and vocal control of the team.

The zimmer frame is a rather ironic present for an athlete who completed her first half marathon this weekend in a very impressive sub two hour time. She regularly joins in the physical challenges she sets the inmates, as a prison-based physical training instructor.

Helen is also keen to plough her time back into rugby through coaching and refereeing, with her first outing on Wasps turf as a referee this season being the Middlesex vs Surrey under 15s girls match.

Tour has featured as a key aspect of Helens life at wasps, visiting all corners of the world, numerous short trips to Europe, including Belgium, Holland and France and further afield to Australia and South Africa. Helen shared in the pride of being the first female team to play at the beautiful Stellenbosch university grounds, where Wasps were warmly welcomed by the South African Rugby Union. Helen especially enjoys the Judge role of a seasoned graduate on tour!

The Wasps club awarded Helen the privilege of Vice-Presidency, during the 20th anniversary celebrations, following a testimonial game that was sworn to be the last.

Fellow Waspie and former England flyhalf Shelley Rae will argue that Helen's passing delivery remains second to none and players around her are always amazed that her diminuitive figure belies an athlete who can tackle and ruck as well as any forward.

Helens Friday night speech spoke of a club that she loves, a great club, with greatness in store for the future. As she stood and rallied her troops, it was evident that H will be around for a few years yet.