Saracens and Exeter will play in this year's Allianz Premier 15s final in the top flight of English club rugby. 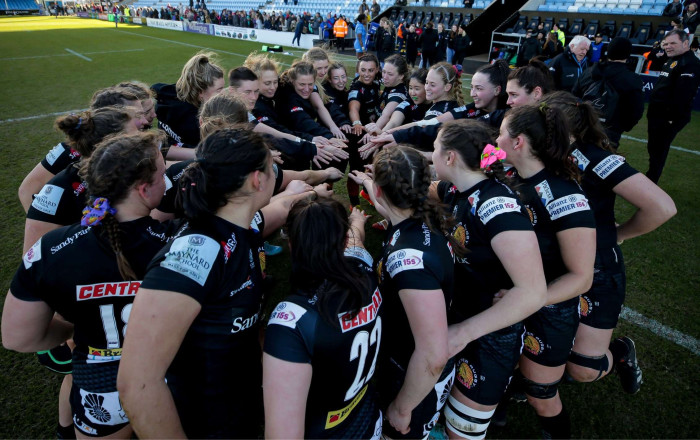 Saracens too good at home

In a re-run of last year's final, won by Harlequins, Saracens were comfortable 30-10 winners in the end in the first of the two semi-finals.

England star Poppy Cleall was a standout player throughout and her first half tries were vital in the victory in front of around 2,000 fans.

Her opening try set the tone before her international teammate Marlie Packer then showed her power to burrow over the line for a second try inside the first five minutes.

USA's Alev Kelter's then kicked a penalty but Quins hit back when Jess Breach raced over in the corner.

Cleall though made it more comfortable with another powerful burst and score before May Campbell then got on the end of an excellent driving lineout just after the restart.

Amy Cokayne scored a late try for Quins but it was too little too late.

Cleall was later named player of the match saying:

"Teams have pushed us this year and we got humiliated at Exeter, then got the win against Wasps coming into this game against the arch nemesis in Quins."

"We didn't play that well in the final last year at Gloucester but they cannot defend the title now and it will be a new winner.

Thrilling comeback from Bristol not quite enough

A thrilling game played out at Exeter with the home sides racing into a 21-0 lead only to be overtaken in the last ten minutes, before scoring themselves at the death to win the match.

Exeter had two early tries on the board through Hope Rogers and Linde van der Velden, with both converted by Gabby Cantorna, whose kicking was outstanding throughout.

Rogers got a second to make it 21-0 but Hannah West and Keira Bevan scored a try each so it was 21-12 at halftime.

Bristol Bears were tansformed after the break and when Phoebe Murray scored and Amber Reed converted, the comeback was well and truly on.

West then got her second from a brilliant driving lineout with just sevens minutes to but Exeter hit back from the kick off Detiveaux crashed over for a stunning finish and victory.

"We found ourselves really dominant in the set piece for the first 20 minutes but then we need to express and open up,"

"We were going through multi-phase defence and then giving the ball up.

"There is no head dropping in this club, it is unbelievable and they are fighters. They will fight to the end and they always believe anything is possible, they are amazing to coach."

Exeter will face Saracens in the final in Worcester on Friday, 3 June.