The opening day of round three of the 2017/18 World Series was full of shock results – but one team sailed through the mayhem without a scratch. 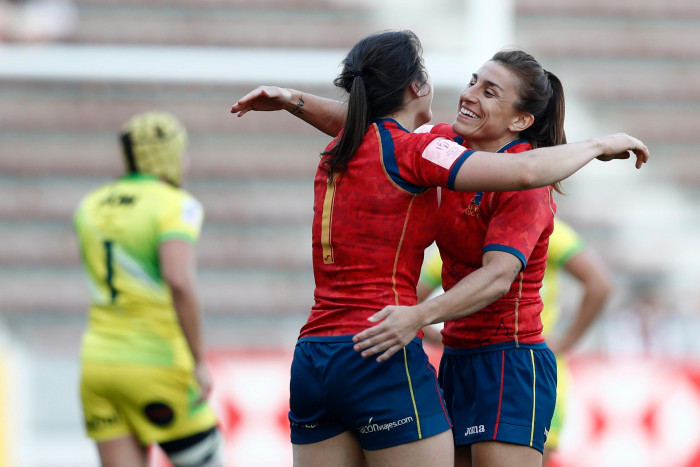 At first, Kitakyushu lulled us into a false sense of security at the start of the third round of the World Series, and the second visit to the Japanese city.

The initial results went pretty much to script. That said, there were a could of edge of the seat encounters. Russia – Europe’s leading team for some years now – opened with an all European clash with last week’s Commonwealth bronze medallists, England. Its not been a great series so far for England, but they arrived full of Gold Coast spirit and recovered from an early Alena Mikhaltsova score to lead for most of the game, only to concede two tries at the death.

Ireland’s match with Spain was similarly nail-biting, Spain coming back from 0-12 to lead 14-12 before Starcey Flood’s try stole it for Ireland, but the other opening games were all big wins for the higher ranked teams.

But after a short half hour break the mayhem began.

To start round two Fiji scored first against Russia through Ana Maria Roqica. Mikhaltsova soon levelled the score… but then Russia seemed to implode. Spilled passes and a yellow card and Fiji were celebrating a 29-5 win. In truth Fiji did have something of a historical advantage over Russia, having won all previous meetings bar one, but given their relative performances this season it was a wake up moment.

Compared to that, the following game that resulted in an England 21-19 win over Canada was almost routine – after all they had done the same thing in the bronze medal game last weekend, but it was England’s first win against Canada in the World Series for over two years. And it was a tight game, England leading most of the game (but not by much), until Canada went ahead 19-14 with only a minute to go. With tension mounting, Emily Scott pulled England level, leaving Natasha Hunt with a kick from out wide… which she hit to give England a 21-19 win.

Pool C was up in the air, with every team on one win, one loss.

Spain lead 19-0 over China in the next game with just three minutes to go before Wang Wanyu pulled a try back. Then captain Yan Meiling added another, and Keyi Chen pulled China within a conversion from the final play… only for the kick to slip wide. After their loss to Ireland, Spain breathed a sigh of relief, but China had woken.

The rest of round two went to regulation – Australia beating Ireland 33-0, and France and New Zealand confirming their last eight spots with big wins over Japan and the USA – but what would round three bring?

Well, it began with Fiji, confidence now flowing, racing into a 21-0 lead at half-time again England. England battled back, but Fiji took the game 31-12 – revenge for that crucial loss on the Gold Coast

Canada were up next – and due to the rules it was win or bust for the third ranked team. A win would give them the pool premiership, but a loss would drop them into the Challenger for the first time due to that earlier defeat against England.

Caroline Crossley gave the big red machine an early advantage, but Daria Lushina was on fire for Russia, a converted try put them ahead and then a big try saving tackle ensured they stayed ahead. Mikhaltsova then scooped up a loose ball and ran the length of the field – and Russia were two scores ahead. When Maria Perestiak added a third it was gave over for Canada.

Next up, Ireland with a regulation win over the guest team for a quarter-final spot? Oh no. China may have taken a game-and-a-half to get going, but now they were motoring. Wanyu put them ahead, and while Ireland briefly battled back, three more Chinese tries and the Irish were in trouble – the fourth Chinese try being a near perfection team score ended by Chen Keyi. 24-12 and China were into the quarter-finals (knowing they would end ahead of England). We have to go back to Dubai in 2016 for last guest team to make the last eight.

But sensation now followed sensation. Unbeaten series leaders Australia now met Spain, and were 14-0 up approaching halftime. But Elizabet Martinez’s brilliantly converted try halved that lead on halftime, and the she added a second from the restart. Australia were now backs to the wall, desperately defending a two point lead, but right at the death Maria Ribera found the gap and Spain had their first win over Australia for five years. Cue celebrations, as Spain also now topped the pool.

Next up, the USA needed a big win over Japan to make the quarters – and they had what they needed at 45-7 with a minute to go. Mifuyu Koide pulled a score back for Japan, but the USA still had enough and just needed to retain the restart and kick it dead. They did the former, but unaccountably failed to do the latter. Japan turned over and Raichielmiyo Bativakalolo scored to put USA out of the tournament – and give England a totally unexpected quarter-final spot.

The final game saw New Zealand see off France in style, demonstrating that at least one team who not going to be derailed by all the madness.

What will tomorrow bring?