Familiar England side for Wales clash 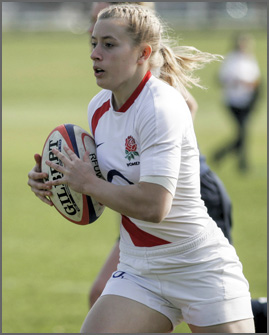 England coach Gary Street has named his side to take on Wales in the 6 Nations, keeping faith the bulk of the team who beat New Zealand back in November.

From the starting team that beat the Black Ferns there is just one change with Fiona Pocock (pictured) replacing the injured Charlotte Barras on the wing. Claire Allen, more accustomed to playing in the centre for England, lines out at fullback this time while Emily Scarratt, who had a breakout season last year, is back in the midfield.

Street has however rejigged his bench and has called up La Toya Mason, Rowena Burnfield and Michaela Staniford while Team Northumbria's Rochelle Clark is also back from injury.

The England and Wales clash is the highlight of the opening round of the women's 6 Nations as the Championship holders take on the Triple Crown holders.

Wales beat England last year for the first time in their history and England will be in the mood for revenge as they chase a fifth consecutive title in a season where they will host the Women's Rugby World Cup which kicks off at the Surrey Sports Park on August 20th.

Street said: "After our win against New Zealand I have kept faith in the team making only one change. There is a genuine buzz in the squa d and we want to keep the momentum going post that victory in the autumn. This is certainly the best team I was able to select.

"I am delighted to welcome back Rochelle Clark who is one of the world's best props, while this is a real opportunity for La Toya, Rowena and Michaela who were the stand out players for the England A team against New Zealand. At the same time we also have Alice Richardson and Tamara Taylor on the bench and they are quality players."

With just seven months until the start of the world cup, the Six Nations is a real chance for the players and all the teams involved to put their final preparations into practice, but Street however insists that his number one priority is the Six Nations.

England will be captained by Bristol No. 8 Catherine Spencer, with Darlington Mowden Park Sharks' Katy McLean as vice captain.