Farah Palmer down to final four

The pool phase of the Dr Farah Palmer Cup in New Zealand is over – now it’s time for the playoffs. 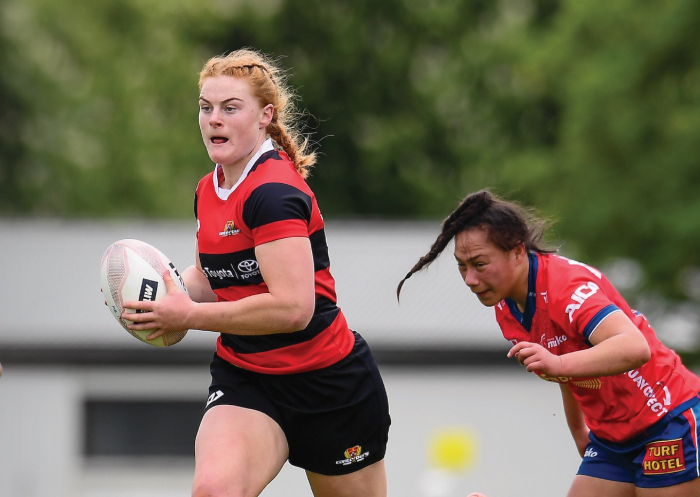 Waikato and Canterbury will have home advantage in next weekend’s semi-finals for the 2020 Dr Farah Palmer Cup.

Canterbury knew that they were guaranteed top spot in the South before welcoming Tasman to Rugby Park in Christchurch, and put on an exhibition to thrash the bottom team in this year’s South Pool 84-0.

In the semi-finals they will meet Auckland, with must consider themselves very fortunate to reach the play-offs after losing their second game of the season, this time at Eden Park in front of a live TV audience.

Waikato stormed into a first-half lead thanks to a double from lock Mia Anderson after two sweeping attacks, stunning the hosts, who had far more territory and possession for long periods. Waikato were cutting Auckland to pieces, keeping the ball alive, and Black Ferns star Stacey Fluhler was eating up metres with plenty of breaks stretching the home side. It was one of Fluhler’s excellent, evasive runs which led to fullback Renee Holmes’ finish out wide and the visitors led 19-3 at half-time.

Auckland were fortunate Waikato squandered another three clear try-scoring chances and the Storm fought back with second-half tries for Sylvia Brunt and Patricia Maliepo while Waikato’s Leomie Kloppers was in the sinbin.

Black Fern Toka Natua was immense at prop for Waikato, who were holding on after her earlier second-half try, and will have to improve in the finals if they’re any chance of winning their first provincial title. Nonetheless their 26-17, only their third ever win over the “Storm”, was enough to see Waikato top the North Pool unbeaten.

It was a result that left Auckland on equal points with both Northland and Counties Manukau, and with a vastly inferior points difference to both. But competition rules say that the tie breaker is actually competition points awarded in the games between the tied teams, and in that basis Auckland gain the narrowest of advantages.

Under the competition’s regulations, if three teams are tied on points, the side with the most competition points against the other tied teams advances. In this case, Counties only had five, while Auckland and Northland had six.

That meant it went to head-to-head between Auckland and Northland, and with the Storm having won 29-22 in their regular season meeting, they advance to face Canterbury.

Had Northland not picked up the bonus point against Bay of Plenty on Saturday, though, Counties Manukau have made the last four, but they miss out despite their 109-3 win at Taranaki, a win so large that reports differ over final total, some saying 107-3..

In their semi-final Waikato will play Manawatū who wrapped up the final semi-final spot with a 29-12 win over Hawke’s Bay in Napier.

Manawatū’s win also won their the Attenborough-McBeth Cup, a trophy that commemorates the first women’s interprovincial match in New Zealand, which was played between the two teams on September 14, 1980 in Palmerston North. The cup is named after the coaches of each team on that day.

Manawatū were too slick out wide for the Tui, scoring some wonderful tries through overlaps, quick hands and sheer pace.

They also defended their line stoutly after their hosts got within seven at 19-12, 10 minutes into the second half when Amelia Pasikala crossed for Hawke’s Bay.

The home side scored first via Michaela Baker but when the Cyclones replied through Selica Winiata they took the lead and never relinquished it.

The fullback dashed 30m to score their opener after Carys Dallinger went through a yawning gap, then the next two were memorable tries via right wing Rangimarie Sturmey who weaved on a 50m run, then Kalyn Takitimu-Cook down the left from a sweeping move starting deep in their own half.

At 19-5 down at halftime the Tui faced a hefty task to overhaul their visitors.