England were too good for Ireland at a sold out Castle Park as they raced into a 22-0 unassailable first half lead. 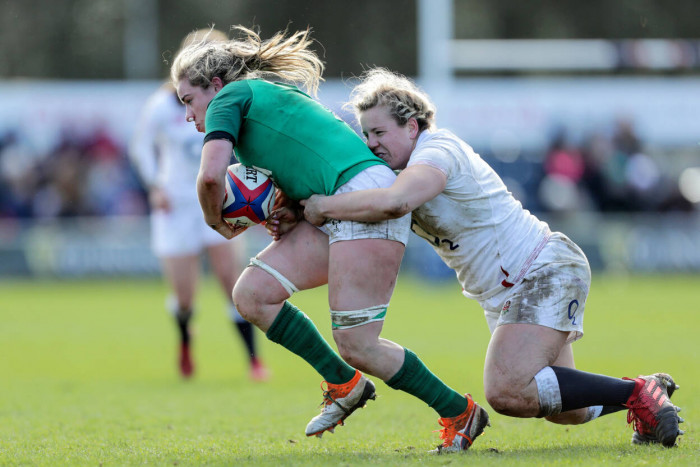 England ran in five unanswered tries to triumph 27-0 but it was a rather subdued second half, with Ireland holding the dominant hosts to just one try.

Despite the comfortable scoreline, this was by no means a vintage England performance and in fact they had one of their poorer 40 minutes in some time in the second half, with poor decision making and a lack of accuracy ensuring the final scoreline probably flattered the visitors, who had over 60% of possession but no really memorable moments in attack.

The home team started well with an early try within the opening minutes from captain Sarah Hunter after flying winger Jess Breach was tackled short near the left corner and England had a chance to drive over from the scrum.

After Emily Scarratt's conversion, Ireland had good territory on the back of Claire Keohane's clever kick to pin the hosts back. Ireland then suffered a blow when Lindsay Peat went off injured with a long break ensuing while she recieved treatment.

When the game resumed, England got their maul going and a lovely team try resulted with first Scarratt bursting through on the angle, before the ball was played wide with Sarah McKenna putting Wasps winger Abby Dow over the the corner.

England ended the half strongly when a quick tap got them into scoring range - Ciara Griffin and replacement Laura Feely held them up - before a dominant maul drove Vicky Fleetwood over for the bonus point try.

A costly turnover ruined Ireland's encouraging start to the second period which included a scrum penalty. England continued to win the collisions, with player-of-the-match Zoe Aldcroft to the fore, but just when they were building momentum for another potential score, Claire Keohane denied them with a vital interception.

A forward pass from Scarratt prevented Dow from doubling her tally, but the title holders did end a scrappy third quarter with try number five. After pressurising Ireland at scrum time, Dow's quickly-taken lineout saw them punch some holes in the defence before Katy Daley-Mclean's pass put McKenna over.

Sene Naoupu finally charged into some space following an Edel McMahon turnover, but England mastered the breakdown again and then it took some tidy work by Eimear Considine to deny Dow on a kick chase. The remainder of the game was error-strewn and vice-captain Naoupu's departure for a head/neck knock added to Ireland's injury concerns.

"I was really pleased with the way we defended and at the same time Ireland defended well too and were so tough to get the ball from. They're becoming very difficult to beat.

"In the first half I thought we were terrific and played some great rugby, we attacked well and in different ways and gave ourselves a good platform to kick on from.

"We didn't execute our attacking game plan in the second half which is disappointing. That said, it's a great win for us and we're pleased."