New Zealand – easily the best team on day one – carried their form into day to win the Kitakyushu Sevens and change the complexion of the 2017/18 World Series. 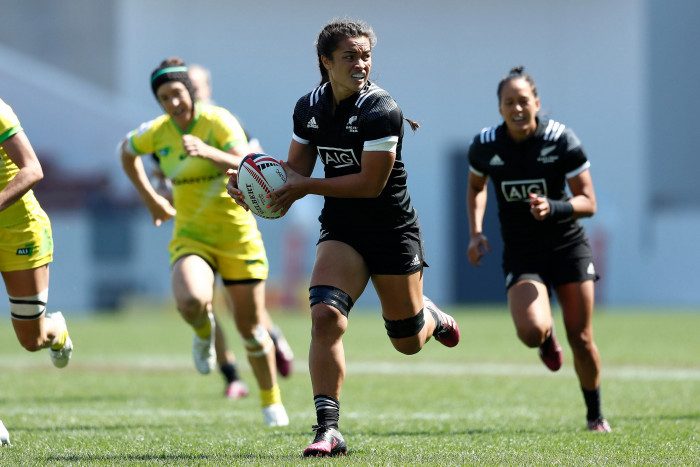 While mayhew reigned all around them, New Zealand sailed serenely on to win the third round of the World Series and close the gap at the top of the standings to just six points.

France, in their first final, battled well and held the Ferns until midway through the second half. It took New Zealand only 40 seconds to get on the scoreboard through Michaela Blyde. Grassineau’s score under the posts levelled the game, but the Ferns went into the break 12-7 ahead thanks to a great step from Theresa Fitzpatrick that left half the French team going the wrong way.

France again pulled level, but Portia Woodman’s speed and the inventiveness of Tyla Nathan Wong put the game out of their reach, to life the title 24-12.

The day had begun with the quarter-finals. New Zealand opened against the promising Chinese, but were far too strong for the guest team, starving them of possession to win 50-0.  An early yellow card for Fiji was crucial in their loss to Australia. Being down to six players cost them two tries, and in the end the series leaders ran away 31-7.

France met Russia for the 31st time for their quarter-final (only Japan and China have played each other more often), and this time it was France who triumphed, a Russian mistake at the start meant they were always chasing the game, France winning 29-7.

Finally, Spain took on England in a fixture that England have dominated since the teams first met in 2005 – until the last year. Deborah Fleming scored the only points of the first half thanks to an error in the otherwise excellent Spanish defence. The second half was similarly tight, Maria Ribeira levelling the score – but Patricia Garcia hit the vital conversion, and Spain (who before 2017 have only beaten England once in 12 years) beat England for the third in 12 months.

Australia and New Zealand met in the first semi-final, and it looked like the Australians were going to avenge the loss in the final last weekend. Evania Pelite and Tyla Nathan-Wong put them 12-0 ahead, but crucially the Ferns pull a score back right on the buzzer. A great turnover from Sarah Goss set up Michaela Blyde to reduce the Australian lead to just two points, before the Ferns turned defence into attack for the winning try from Tyla Nathan-Wong.

The all European semi-final between France and Spain, where the French were always in control, winning 21-0.

Australia took third after Spain were unable to repeat their win the previous day, and Russia were fifth beating Fiji – Mikhaltsova adding two more tries to the remarkable record-equalling five scores she made against England in the previous game, which had seen Russia overwhelm England 41-0.

However, England came back from that to beat China 36-5 for seventh – the Chinese finding the second day far tougher than the first.

The United States won the Challenger trophy for 9th place, beating Ireland 24-19 after the Irish had stunned Canada by beating them by the same score earlier in the day. Canada beat Japan 33-14 to take 11th.

What do we take away from the topsy-turvey Kitakyushu 7s?

Australia may missed their top three players, but came very close to continuing their run despite that, France showed that you they at least can switch players in and out of 15s without it seriously affecting their results, but for sheer consistency there is nothing to beat the Ferns.

One final matter of note. The effect of the results this weekend is that Australia (in Pool C) now fall into New Zealand’s side of the draw (Pool A) for Langford, meaning that – barring surprise results - the two teams will probably meet at the semi-final stage in the last two tournaments.