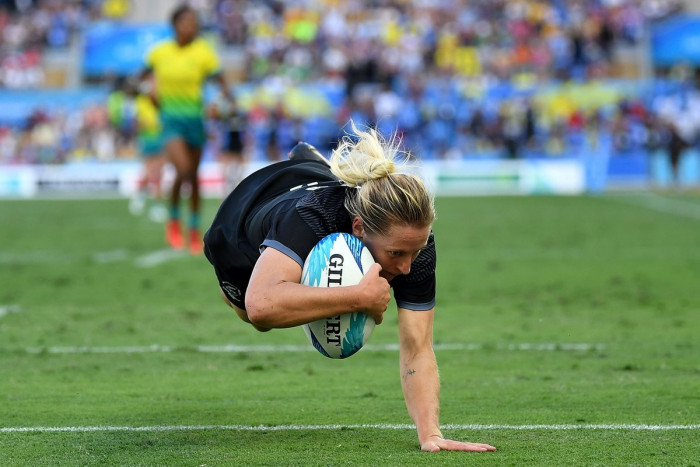 Even for for a neutral it was a thrilling, heart pounding final. The Gold Coast heat -30 degrees in the shade – and there wasn’t much shade - was noticeably draining on all players throughout the tournament, with New Zealand for example, adopting a tactic of starting and ending the game with Portia Woodman, but resting her in the middle.

New Zealand dominated the first half of the final. Woodman opened the scoring early on, and after Australia’s attempt to counter from the restart was lost through an uncharacteristic handling error, the Ferns maintained possession throughout the rest of the half, ending it with a second try from Michaela Blyde.

But Australia came back. A near certain Emma Tonegato try was snuffed out by some great tracking back, but the resulting lineout led to a score under the posts by Emilee Cherry. The speed and power of Ellia Green then levelled the scores, but despite running around to near the posts, the kick was crucially missed.

The rest of the half could have gone either way but as the buzzer went Australia regained possession, moved the ball right only for Cassie Staples to – sensationally – kick the ball into the crowd, possibly because one of Australia’s lesser experienced players had assumed the second conversion had been kicked.

The 27,000 capacity crowd went near silent and it was an error that resulted in a massive 6 minutes of extra time. The game became a test of sheer physical fitness with both sides having chances against tiring defenders. The buzzer for the end of the first period of extra-time went with Australia looking like they might steal it, but the Ferns defended brilliantly and then suddenly Kelly Brazier saw a gap and sprinted for the corner. With two Australians in pursuit she just held on to score to win gold for New Zealand.

This was the first time Australia have not won sevens gold in a multi-sport Games, after triumphs at the Olympics, Youth Olympics and Youth Commonwealth Games.

The game came after a bronze medal match that also saw a reversal of the Rio result. Aided by an early yellow card, England swept to a 19-0 lead in the first half, with scores from Lydia Thompson, Deborah Fleming and Claire Allan, trapping Canada inside their 22 for most of the seven minutes. England were fortunate to avoid a yellow of their own when a Canadian was tackled while in the air, but from the resulting penalty Canada pulled a try back to end the half just two scores down.

Jess Breach restored England’s three-try lead at the start of the second half, but after that it was all about England holding on, with Canada eating into the England lead. With well over two minutes left – an age in sevens – they had pulled the score back to 24-19, but England held on to win bronze and their first visit to a podium in a multi-sport games.

Fiji blitzed Kenya to take fifth place with a 40-5 win, but Wales ended the tournament well with possibly their biggest sevens scalp since winning the European Championship a decade ago, beating World Series Qualifier Finalists South Africa 19-14 to finish seventh, having come with a minute of beating Kenya earlier in the day, leading for most of the match before losing 14-12 right at the end.

The Women ‘boks had the most disappointing weekend, finishing with five defeats over the three days, and eighth place – including a second pool defeat to Kenya in two weeks, having lost to them at the same stage in Hong Kong. The African Sevens in Gaberone, Botswana, on 26/27 May now looks like being far from the certainty it has in past years – though in truth Kenya have been gradually eating into the ‘boks primacy for some years. They just chose the world stage to demonstrate that the continent may have a new number one at sevens.

That was one the most notable results from the pool stages, England’s win over Fiji in their opening match being the other crucial result. With three World Series team in Pool B one was going to miss out, so this was a near knockout fixture that England eventually negotiated 17-5 in a scrappy game that belied the much-improved form England (and Fiji) would show in later games.

The first two rounds were played in a Friday afternoon, attracting possibly the largest crowd we have seen for an entirely women’s sevens programme and ended with a classic encounter that saw Australia come from behind to beat England 29-12. It sent the crowd home happy, though Australia – who also conceded a try to Wales – had shown themselves to not be quite the invincible team we had seen in Sydney.

A capacity crowd on Saturday saw the final pool games. New Zealand and Canada already knew they were in the semi-finals, but the Ferns untroubled 24-7 win over Canada showed that they were hitting their straps with great confidence. Australia and England made their semi-final spots secure, England with a 45-0 win over Wales – their best ever sevens win against Wales, a remarkable score coming only nine months after Wales came within a couple of conversions of beating England in European Grand Prix and knocking them out of the World Cup.

The resulting semi-finals were similar, with Canada and England beginning well against Australia and New Zealand – each giving their opponents a first-half scare – but in the end the favourites comfortably made the final 33-7 and 26-5 respectively.

One last outcome to note. The five World Series teams also ended in the top five places. Not so unusual, but it does highlight that the gap between the World Series and the rest is really now an unbridgeable gulf. If we discount the results of the understrength Spanish team that went to Kazan last July, you have to go back to 2015 to find a team from outside the World Series beating a full-strength World Series team, when Netherlands beat France in Malemort (yes, that game) or, if your prefer, 2014 when Portugal beat France in Kazan.