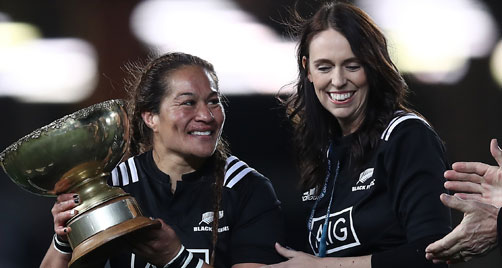 (Report - NZRU) Securing their forward dominance, the Black Ferns were able to unleash their backline skills with effect to complete successive wins over Australia when securing the Laurie O'Reilly Memorial Trophy 45–17 at Eden Park.

Up 19-10 at the turnaround, the Black Ferns ran in four unanswered tries before big Australian replacement prop Hana Ngaha scored in the 71st minute. By that time the Black Ferns had put the issue well beyond doubt.

Evidence of the confidence the Black Ferns enjoyed was evident in the 50th minute try scored by halfback Kendra Cocksedge off a scrum just out from Australia's line. Cocksedge ran wide from the scrum to take a pass from No.8 Aroha Savage.

Cocksedge then fed second five-eighths Theresa Fitzpatrick, who had been on the end of a well-weighted pass from the halfback six minutes earlier to open the second half scoring, to double around Fitzpatrick and into wide open real estate to score.

In the 57th minutes wing Renee Wickliffe showed her acrobatic abilities to touch down in the corner and she was backed by fullback Selica Winiata who finally got the room to put her speed to effect after replacement midfield back Chelsea Alley made ground ground with a strong surge.

The Black Ferns' forward power was the basis of their first half lead with prop Aldora Itunu crossing after picking up the ball and driving over from the base of a goalline ruck three minutes into the game.

Eight minutes later her propping partner Pip Love, one of the players of the game in last week's first Test, scored in a similar type situation.

Australia responded when first five-eighths Trileen Pomare stepped back inside from a ruck close to the line to score in the 15th minute.

But the unrelenting home pack produced the goods again when lock Eloise Blackwell was able to put her power to use to get over the line to take New Zealand's lead to 19-5.

However, three minutes from the halftime break, Itunu was forced to leave the field with a leg injury and in the follow-up play it was Australia's hooker and captain Liz Patu who managed to ground the ball over the line and convince the TMO that she had scored.

It was a tough night for the Australians who spent much of the evening attempting to halt the Black Ferns' tide with the defensive toll showing out in the second half.

For the New Zealanders it was the end of the first stage of their international season with November Tests ahead against the United States (Chicago) and two games against France.

Coach Glenn Moore said the performance had been pleasing and while most of the action came in the second half that was down to needing to build up pressure earlier in the game.

"We wanted to take it to them up front. We thought they were a wee bit suspect at times around the edges and we had done a lot of work this week getting latches and we scored tries off that," he said.

At halftime the talk was about getting the ball to the outsides once the Australians had been committed in tight.

"I think the pleasing part was that some of the things we worked on around their jamming defence we certainly got around them," he said.

The future would be about continuing to build their game to achieve the style they wanted to play. It wasn't just one style.

"We've got a new look team with a number of new faces and it's going to take a little bit of time to build that confidence and we're well aware of that but we were better this week and I'm confident we'll be better next time as well," he said.

Prop Aldora Itunu was taken to hospital after the game but Moore said he understand she was not badly injured. She had been a powerful contributor to the side but he was also pleased that all of the props in the squad had played well.

"Every Test we do get on big grounds is awesome for us. To have a fixture alongside the All Blacks today, all the girls are excited, especially at a home turf where your family and friends can be present," she said.

"If we do get a Test on its own that's outstanding, but for us Black Ferns it's just getting more Test matches, getting out there and performing and displaying what the women's game is all about so whether it's on its own or alongside another team like the All Blacks we'll be happy just to play rugby."

With the players going back to their provinces to play Farah Palmer Cup games and with their contracts coming into effect the game was heading in the right direction, she said.

Moore said the side's two Test matches in France in November would be stand-alone games and in a recent stand-alone game between France and England a crowd of 20,000 had attended and French officials were confident they would have good attendances for the Black Ferns games and the New Zealanders were excited about that.