New Zealand are back on winning form, winning their first round of the 2019/20 Series. 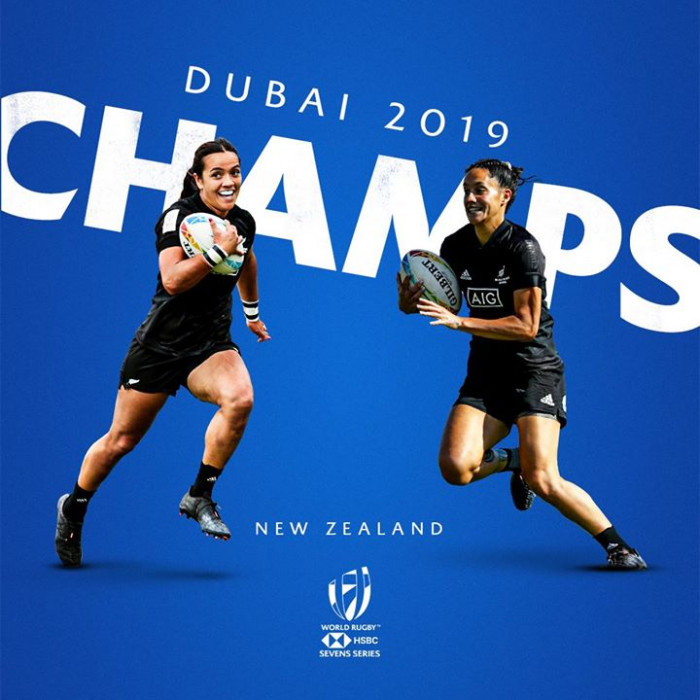 New Zealand have won the Dubai 7s, becoming the first team to ever win back-to-back titles..

A consequence of Dubai (and other) rounds now being “double headers” is that the tournament is extended to three days, and there are fewer play-off games.

Day one saw just one round of pool games, New Zealand, USA, Australia, Canada, France and Spain all opening with wins.

The tournament got off to a great start with a nail-biter between Ireland and Spain. Amee-Leigh Murphy Crowe scored the first try before a dummy from Baker saw her double Ireland's lead to 10-0. But with seconds to go to half-time Spain put Patricia Garcia in to space to score in their 200th match in series history, and then Patricia showed nerves of steel with time up on the clock at the end of the game to convert Maria Garcia's try and snatch a 12-10 victory for Las Leonas.

Australia had never lost to Fiji in 36 previous meetings and continued their record with a 38-0 victory to top Pool B after day one.

Canada looked on course for a comfortable opening Pool A against Russia after they took a 19-0 lead at half-time, but Russia roared back to make it 19-12 with more than three minutes to play. Charity Williams eased any Canadian nerves with their fourth try but Zdrokova shrugged off an attempted tackle to run a try with seconds remaining to make the final score 24-19.

USA began their quest for a third consecutive title with a 29-7 defeat of Brazil. France gained some revenge for their 2-0 loss in their November tests to wrap up the 29-0 victory against England in their head-to-head with eight victories apiece in World Series history, though England still lead by one game overall.

New Zealand dismissed Japan with a 48-0 victory in a game that saw Japan’s Riho Kurogi stretchered off injured in the first half.

France provided the first shock of the Emirates Airline Dubai Rugby Sevens 2019 women's competition by beating defending champions New Zealand 19-14 in the final match of the pool stages on Friday.

Day two saw the rest of the pool games.

The highlight of the day came from the final game when France beat New Zealand for only the second time to top Pool C. France scored first through Okemba but New Zealand came back with a brace of tries by Brazier to lead 14-7 at half-time. France dug deep, though, and were level within two minutes of the restart thanks to Okemba's second before they worked Grisez over for their third and then held firm in defence, barely allowing the Black Ferns out of their own half, to wrap up the win.

However, France’s inconsistency was demonstrated win their earlier game with Japan with the Asian champions had restricted France to only one try in the first half. Shannon Izar sliced through the defence before Nassira Konde added a third in the second half but the 21-7 final score was unimpressive compared to what both New Zealand and England achieved in the same pool.

England were well beaten 40-12 by New Zealand in their second game, and needed to beat Japan by 49 points to reach the quarter-finals. But after starting brightly with a three-try burst in as many minutes early they were unable to shake off Japan and won by only 31-14.

As a result England were the “unlucky” third placed side, missing out on a quarter-final.

In Pool A Canada's began with a 43-0 victory against Brazil, but the United States were shaken when Daria Shestakova gave Russia an early lead, but the USA stormed back with four unanswered tries to win 33-14 victory.

Despite this second loss, Russia's quarter-final spot came thanks to a 22-7 victory over the Brazilians before the battle for North American pride and top spot in Pool A saw USA dominate Canada and record biggest ever victory against their rivals, 34-10.

In Pool B Spain again featured in a tense fixture, this time against Fiji. Ana Maria Naimasi twice gave Fiji the lead against Spain Erbina sisters combined to put Spain ahead, the elder Amaia sprinting down the left before offloading to Lide to run in under the posts for what looked to be the winning score. However, Fiji worked Mereula Torooti over with 30 seconds to go and Lavenia Tinai added the conversion to snatch a 19-19 draw.

Australia then saw off Ireland 38-5 before Fiji and Ireland met in a game where victory would mean a quarter-finals place, a defeat a place in the Challenge Trophy. Murphy Crowe gave Ireland an early lead before Naimasi and Raijieli Daveau edged Fiji ahead to raise hopes of ending a seven-match losing streak in the head-to-head. They needed two late tries to do so, Asinate Savu and Namaisi's tries securing the 28-12 win. Finally, Australia scored six tries to beat Spain 38-5 defeat, but both teams qualified for the last eight.

On day three Australia again met Spain, and again won comfortably, if not quite as comfortably as on the previous day. Sharni Williams scored their only first half try, but Emma Tonegato’s try early in the second half doubled the score before Evania Pelite scored a third to confirm a 21-0 win.

A first half brace of tries from Karen Paquin for Canada against France showed that form in pool games is rarely a good guide to the knock-out stages. Charity Williams added a third early in the second half, creating a gap too big for France to close, despite a try from Shannon Izar.

New Zealand and the United States beat Fiji and Russia comfortably to also make the semi-finals.

With no games scheduled for the minor places, the tournament went straight into the matches that would decide the finalists. In the opening game, Canada took a narrow 12-5 lead into the break, and Australia pulled level early in the second period. Charity Williams finally broke the deadlock with less than two minutes to go, before Ghislaine Landry rounded off a 26-12 win for Canada from the final play.

The United States have a great record against New Zealand in recent tournaments, but the Ferns made no mistake in the second semi-final with four tries split either side of halftime ensuring that the game was well won before Nicole Heavirland’s consolation try for the USA at the end.

The USA still took third place, however, beating Australia comfortably 24-7 before the final between Canada and New Zealand. Stacey Waaka gave the Ferns an early lead, but this was soon wiped out by Karen Paquin's converted score that put Canada ahead - a lead extended by a try from Julia Greenshields just before the break, where Canada lead by 14-5.

A tense second half saw the Ferns pull back to within two points after just two minutes, thanks to Stacey Waaka's converted try. Canada held on to their lead despite huge pressure over the final five minutes before Gayle Broughton finally found a way through from the last play.