Ferns on top of the world

If ever there was doubt about New Zealand being back on top in sevens there is no doubt now as the beat Australia for the second time in two days, and fourth in the series, to win the Las Vegas Sevens. 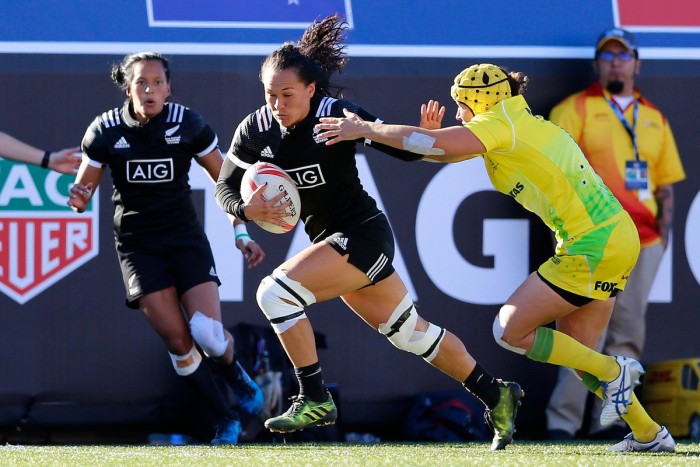 New Zealand extended their lead at the top of the HSBC World Rugby Women’s Sevens Series after their third win in four tournaments at the USA Sevens in Las Vegas.

The 2015-16 season looks an aberation as the Ferns of old returned, keeping possession, waiting patiently for gaps to appear in tiring opposition defences - and then pouncing. That was certainly the case this weekend where the pace and power of Portia Woodman, Michaela Blyde, Niall Williams, player of the final Ruby Tui and others were too much for most teams to handle.

In that final, New Zealand never looked in trouble against Olympic champions Australia, racking up a 28-0 lead before Mahalia Murphy responded with a consolation try for the Aussies to make the final score 28-5. Meanwhile, Woodman, Tyla Nathan-Wong, Tui and Alena Faalogoifo Saili had already put the Black Ferns Sevens out of sight.

Afterwards, a beaming Woodman said: “We came second in the Olympics to Australia so to beat them now in two finals this season, in Dubai and again tonight, is kind of bitter-sweet. But we are delighted with this win, we’re going to enjoy it and then look ahead to the next tournament and see how we go from there.”

Woodman changed position in Las Vegas this week, moving into the forwards allowing Blyde to operate a wider role in the team. It’s a change that went down well with the 25-year-old.

She said: “It’s very different playing in the forwards – you don’t score as many tries. But I love it. I love being in the scrum and the lineout. I’d love to stay there and probably will with Michaela playing as well as she is.”

Meanwhile, in the bronze final, Canada beat USA 31-7 - much to the disappointment of around 30,000 home fans packed into Sam Boyd Stadium. Captain Ghislaine Landry, who became the all-time series leading points-scorer this weekend, was also the first to pass the 700-point mark, overtaking Woodman in the process. In another solid performance after winning the cup in Sydney, she was well supported by Britt Benn, who scored six tries, Breanne Nicholas, Kayla Moleschi and the ever-dependable Jen Kish.

Earlier in the semi-finals Australia conceded an early try to Canada but came back strongly with Ellia Green and Emma Tonegato each scoring twice. New Zealand defeated USA in the second semi-final. America started brightly with an early score from Kristen Thomas and a generally robust display from Alev Kelter. But New Zealand were hungry for this and despite the baying Las Vegas crowd, Blyde and Williams crossed the whitewash to secure a 12-7 win for the Black Ferns Sevens.

Europe's woes continued with their three surviving teams in the Cup again failing to win any games against teams from outside the continent. Day two had begun with the quarter-finals, which all went to form. Canada are too strong for France, and while Fiji, Ireland and Russia all looked competitive in the opening minutes, Australia, USA and New Zealand pull away to reach the semi-finals.

The defeated quarter-finalists competed for fifth place, which was won by Fiji - for the third time in the series - seeing off France and then Russia, who are now by a margin Europe's top ranked team. Ireland again finished 8th - as they had in Sydney - the early promise of their win against the USA at the start of Saturday now seeming a long way off as they lost 15-5 to France.

In the Challenge Trophy semi-finals, England saw off Argentina easily but the key game was the semi-final between Brazil and Spain. There may be three rounds to go after Las Vegas, but with both teams at the bottom of the table relegation is a growing concern. As a result, Spain’s 19-7 win could have lasting importance. When Spain beat England in the Challenge Trophy final they opened up a vital two point over Brazil in the series.

New Zealand, Canada, United States and Spain have already qualified for the World Cup. The next four highest placed teams will also qualify. At present these are: Australia, Fiji, Russia and France

The remaining eight places will come from regional championships: