New Zealand are back at the top of the World Series after a second series win in a week. 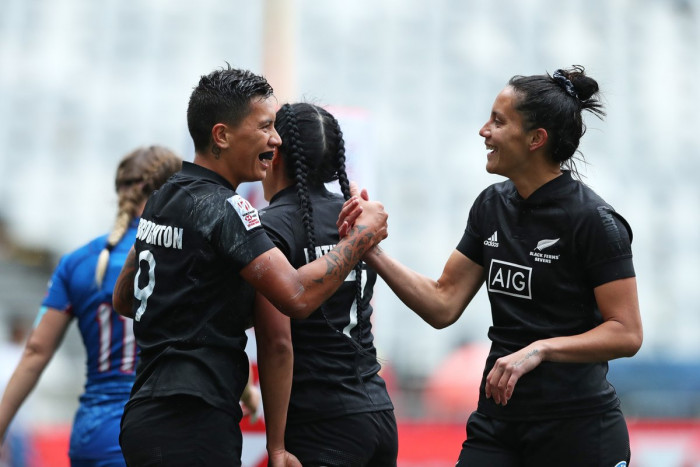 The third round of the World Series arrived in Cape Town on Friday for what was the second “double-header” of the series, necessitating again a three-day tournament with reduced series of games on the final day.

Fiji have turned themselves around after a poor start in Glendale and caused the surprise of the opening day with an impressive 38-19 Pool A defeat of Russia at Cape Town Stadium on the opening day (13/12), scoring with just 20 seconds played through Roela Radiniyavuni. A great hand-off from Fiji captain Raijieli Daveua saw her extend the lead to 12-0, but Russia came storming back with tries by Elena Zdrokova and Kristina Seredina (2) to lead 19-12 at half-time. The second half was all Fiji, though, with their physicality resulting in a four-try blitz with Daveua scoring her second and Tokasa Seniyasi grabbing a brace in the 38-19 win.

The rest of the opening day wen to form with some big wins. Pool C opened the day and it was Ellia Green scored the first-ever women's series try in Africa on the way to an Australian six try win over England, after which the United States saw off Ireland 38-0.

Next up Pool B where France met Spain for the 46th time – no two teams have met more often in international sevens – and won for the 36th time. It’s over four years (and 24 matches) since Spain beat France and it never looked like that record would change as Les Bleues raced to a 24-0 lead by half-time. A brief Spanish comeback reduced the margin but in the end France won comfortably 36-12. Canada were equally impressive with a 32-0 victory against the Brazilians.

After Fiji’s triumph the day ended with New Zealand welcoming South Africa back to the World Series with a 40-0 win.

In the second round in Pool C Tonegato scored twice for Australia as they beat Ireland 24-0 victory, their 15th in a row against the Irish, and – after a scoreless first half - the USA saw off and improving England 21-7.

France were clinical against Brazil in Pool B winning 45-0. Spain were tied 7-7 with Canada at halftime, but the Canadians had the best of the second half runout out 28-7 winners.

The second round ended with Pool A, with South Africa getting dream start against Russia, quick ball creating space out wide for Liske Lategan to have the honour of scoring their first try on home soil. Russia weren't behind for long with captain Alena Mikhaltsova first brushing off a weak tackle to race away before Elena Zdrokova and Baizat Khamidova dotted down for a 19-5 lead at half-time before extending their lead for a 31-12 victory.

Finally Fiji almost pulled off another sensation, this time against a New Zealand team who were guilty for a number of uncharacteristic handling errors. Fiji who struck first with Viniana Riwai over for the opening try, the Black Ferns only pulling level through Gayle Broughton from the final play of the first half. Stacey Waaka increased New Zealand's lead but Asinate Savu pulled Fiji back to within two points leading to a nervous finishfrom which New Zealand were relieved to escape 12-10.

And so to the final round of pool games, with really just one place to be decided – thanks to Fiji’s heroics. England needed a good performance against Ireland and then had to sit back and watch Spain. This they achieved with a commanding 36-7 victory.

Spain needed to match that against Brazil, but instead trailed 14-5 at half-time after tries by Thalia Costa and Isadora Cerullo. They regrouped and scored four tries – but it was not enough.

Even then things were not over as a 30 point win by New Zealand against Russia would still have put Spain through and England out, but with Russia defending well and New Zealand already through the result was a pointless opening half and in the end only a 12-0 victory. England were into the last eight.

The highlight of other games was the United States against Australia. The USA are the in-form team this season, but it was the Olympic champions who established a 14-0 lead inside four minutes. Kelter and Lauren Doyle scored to tie the scores, but Tonegato gave Australia the lead again in final minute. However, USA had one last chance and worked the ball wide to Cheta Emba who, in wet conditions, dropped the ball to allow Australia to celebrate the win.

Day three, and the quarter-finals began with two big wins for France (31-0 over Russia) and Australia (38-7 against Fiji). The third game was a tense classic, however, with Canada gaining revenge for their pool defeat last weekend, beating the USA 15-14 in a game where the lead changed hands four times, Julia Greenshields getting the decisive third Canadian try on the 11th minute.

Then England took on New Zealand and lead twice, opening up a 21-7 win early in the second half, but the Ferns gradually pulled the game back, Ruby Tui getting the vital try to tie the scores in the final minute before Mahina Paul scored the winner in overtime.

Ireland won what could prove to be a crucial relegation battle with Brazil 26-7, before the semi-finals which began with a titanic battle between Australia and France. Australia lead 17-7 at the break, but France roared back from the restart to lead 19-17 with two minutes to go. But Australia were not finished and a Rhiannon Byers try won it for them with seconds to go. The Ferns assured an all Oceanian final with  a 15-5 win over Canada.

The third place game between France and Canada was another terrific battle. Fanny Horta's try from the final play sent France into the break 10-7 and this was extended to 17-10 shortly after the restart, but Canada battled back and a Bianca Farella try leveled the scores from the final play. Into a tense extra time where after four minutes Julia Greenshields finally broke the deadlock and gave Canada bronze.

The final saw New Zealand take on Australia for the 40th time in international sevens, and ended with a 23rd win for the Ferns. Kelly Brazier opened the scoring after three minutes, and a converted Rubi Tui try extended the lead to 12 points at halftime. Ella Green pulled Australia back into the game after the restart, but it was Tui again who on hand with a minute left to give the Ferns their second series win in a week, results that put the champions six points clear at the top of the series.