Ferns win as Aussies mourn what might have been

A nightmare two minutes turned a Trans-Tasman opening fixture that saw Australia race to 17-0 lead, before two yellow cards gave the initiative to the home team. 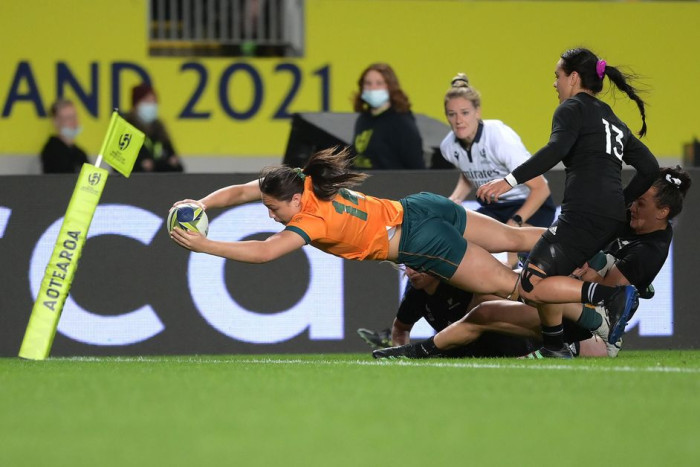 Hosts New Zealand recovered from conceding three first-half tries to beat Australia 41-17 in the final game of the opening day.

Some 34,235 spectators attended the opening triple header in Auckland. How many were in their seats for this third fixture is impossible to say, but they were certainly stunned into silence as Bienne Terita (two) and Ivania Wong touched down to give the Wallaroos a 17-0 lead inside half an hour.

The Black Ferns hit back before half-time through Joanah Ngan-Woo and Portia Woodman, but Australia still lead 17-12 at the break.

Awhina Tangen-Wainohu and Ruby Tui (twice) also crossed the whitewash after the break as the Black Ferns confirmed a bonus-point victory at Eden Park.

Those were the headlines for the second half, but the Wallaroos – who had never beaten the Black Ferns in 22 previous attempts – have perhaps never been closer to a breakthrough.

Australia had kept their opponents pinned inside their own half in the early exchanges and were only denied a try by some brilliant defence from New Zealand winger Tui.

The Black Ferns’ resolve broke in the 14th minute, when Terita stretched over in the right corner for her first try of RWC 2021.

Within 120 seconds, the Wallaroos’ lead was 12-0 as Wong scored a breakaway try. Terita then grabbed her second of the match to give her side a three-score lead with less than 28 minutes on the clock.

New Zealand had failed to land a punch up until that point but in the closing 10 minutes of the first half, Wayne Smith’s side found some form.

First, Ngan-Woo stretched out from close range to get them on the board, following great work from Pip Love and Stacey Fluhler. Then, Portia Woodman displayed her power and pace to dot down in the left corner.

The Black Ferns were still five points adrift at the break, but that deficit was erased within two minutes of the restart as Woodman crossed for a second time.

Then came Australia’s two minute nightmare. It began when Arabella McKenzie had an opportunity to edge the Wallaroos back with a penalty in front, but struck the right post.

Then in the passage of play that followed, the Wallaroos lost both Ivania Wong and captain Shannon Parry to the sin bin.

Down to 13 players, Australia conceded two tries as replacement prop Tangen-Wainohu powered over from close range and Woodman then crossed for a third time, following a slick offload from Fluhler.

By the time Australia were back to 15 players a possible lead of 20-17 had become a deficit of 17-31, and there was no way back. The Ferns added two tries, both scored by Tui and a big scare for the Ferns was behind them.

Afterwards Australian Head Coach Jay Tregonning said: “The Black Ferns obviously showed their class in the second half, we weren’t accurate enough in our attacking breakdown and gave them the opportunity. That first half showed how we can play and, again, it is just a matter of the same old story with regards to the consistency of our performance. We obviously got our fair share of territory and possession during that first half and that was part of how we wanted to try and play the game and put that pressure on them. We let the pressure off them by not being inaccurate at the breakdown and being ill-disciplined in the second half.”

“But we’ve proven for a long time (in the match) that we can be competitive, we have just got to put on these 80 minute performances. We will try and freshen up the girls in the week leading up to Scotland and try and put on a good display next weekend.”