New Zealand won their third consecutive round of the World Series today (26th January) in Hamilton, opening up a 12 point gap as the expanded eight-round series reached its half-way point. 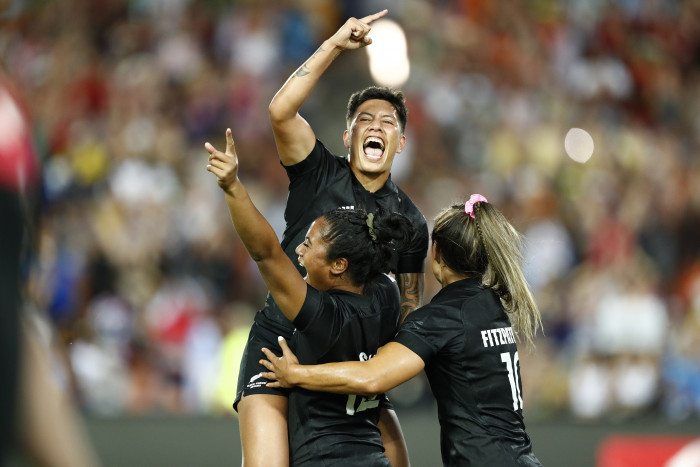 The need to compress a double-header round of the World Series into just two days meant the loss of the quarter-finals from the schedule creating a very different vibe on the opening day. Any slip up in the pool stages could result in missing out on the semi-finals.

New Zealand can start slow in tournaments – if they are vulnerable to defeat it is almost invariably in the pool stages – so it was interesting to see them respond to this new situation by hitting the ground hard. Playing in front of a home crowd obviously helped, but the Ferns were taking no prisoners this weekend.

They began with a 40-7 win over China, who showed that their month-long preparations had had some effect as when Gu Yaoyao scored China's first ever series try in nine meetings with New Zealand. But the hosts were never seriously troubled.

There were just two rounds of pool games on Day 1, and the Ferns ended the day with a second win – also by 40-7 – against England. The Roses had pushed the Ferns to needing a sudden death extra-time winner in the quarter-finals in Cape Town, but coming out of a 26-19 loss to Fiji were never at the races.

England are frustrating inconsistent and Hamilton was no different. They had opened he scoring against Fiji through Alex Matthews, but then slipped to a 26-5 deficit before starting a comeback that was too late in the end.

After a good win against England Fiji were then victims of the opening day’s biggest shock when the lost to China after Roela Radiniyavuni was sent off in the third minute, repeat their result in the same fixture in Biarritz last June.

The United States and Australia were the top teams in Pool B and both navigated the opening day unbeaten. Both were pushed all the way in their opening games against Russia and Brazil respectively, Thalia Costa's pace for Brazil being the big highlight as she scored to briefly level the scores in the first half.

It was therefore surprising who one sided the reversed games in the second were, USA and Australia winning comfortably.

The Day 1 results in Pool C were more consistent, France and Canada beating Ireland and Spain comfortably in both rounds of matches.

On to Day 2 where the lack of quarter-finals turned a couple of pool games into near and actual knock-out fixtures.

Canada and France met in the first of these, with the winner guaranteed a semi-final place which the loser would have to wait. With so much at stake the result was terrific game that Canada edged 21-19, France appearing to do the maths at end when they seemed to take a two point defeat that would probably see them into the last four as the best second placed team in preference to a possible 9-point loss that might have created more doubt.

Australia played Canada in the other “knock-out” game. A draw would have seen both teams through but fortunately this did not seem to be a consideration, Australia just edging a game that ebbed and flowed 19-14.

Elsewhere England were a totally different team on Day 2 dismissing China so comprehensively that they went from being real candidates for the 11th place game to winning themselves a spot in the 5th place playoff in just 14 minutes.

Fiji also looked good again, and matched New Zealand try for try in the first half, but the Ferns found another gear and swept to a 40-21 win.

In the first of the semi-finals, Canada's Bianca Farella became the second woman to score 150 tries on the series in between scores by Australia captain Sharni Williams and Ellia Green. Australia elected to play on with the clock in red and paid the price, Canada working Kayla Moleschi over after almost two minutes for a 14-12 lead. Dominique du Toit gave the Olympic champions the lead once more, but a missed tackle allowed Charity Williams to canter through before Ghislaine Landry raced away to wrap up the win and ensure Australia's two-year wait for a title continues.

The second semi-final was equally tight with both sides going close before a quick tap from Hirini saw Theresa Fitzpatrick score the opening try against France. Fluhler saw yellow for taking a player out in the air from the second-half kick-off and France capitalised with Camille Grassineau powering over to give them a 7-5 lead. A Kelly Brazier kick through allowed Fluher to atone with a try, the conversion of which saw Tyla Nathan-Wong surpass Woodman as New Zealand's all-time point scorer. Brazier then had the final say as the hosts ran out 19-7 winners.

And so to the final where the Ferns continued their perfect record against Canada in finals to win a World Series round in front of a home crowd for the first time.

Canada had opened the scoring through Brittany Benn in the fifth minute despite the high tackle of Ruby Tui, which saw her sent to the sin-bin for two minutes. New Zealand held firm in her absence and then with the clock deep into the red at the end of the first half they made the breakthrough, Stacey Fluhler being stopped short before Michaela Blyde went over from closer range than many of her tries this weekend.

Fluhler won the restart and the ball was quickly worked along the line to Blyde, who stepped her way through the Canadian defence for her eighth of the tournament. Niall Williams' try with little more than two minutes to play pushed the Black Ferns Sevens out to 19-7 and all but secured the title.

However, there was still time for Fluhler to turn another restart take into New Zealand's fourth try of the title decider and see her become the first player to score 10 tries in a series tournament since her fellow Black Ferns Sevens star Portia Woodman in Glendale in October 2018.

“This is massive. To everyone who has supported us over the last couple of days, thank you very much. We love all of our fans here in New Zealand,” said captain Sarah Hirini. “It was the heart and grit that got us over the line, we’ve been training for this for so long to be playing in New Zealand. Canada are amazing but the way that the girls fought to get the ball back in – obviously we’ve got some speedsters to score us some tries as well.”

Fluhler added: “That was a very eenjoyable moment. We know we’ll only get one opportunity to play here at home this season so we really wanted to make our fans, our friends and our family proud and I think we did exactly that.”