The Southern Hemisphere shared the glory in Paris this weekend. New Zealand were again superb, but the quarter-final loss in Dubai came back to haunt them as Australia took the series. 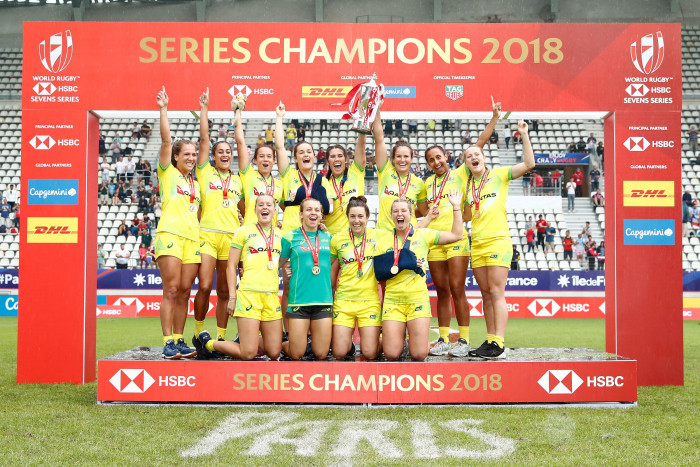 Australia only needed to reach the final to win their second World Series – but it was touch and go all the way in Paris.

The Black Ferns were imperious in Pool A. Their usual slow start saw England match them try for try for the first half of their opening game, but thereafter they swept past Wales and Ireland to top their pool.

To stop Australia taking the series title, New Zealand needed to play them in a semi-final or hope that someone else would beat them in the knockout stages. Unfortunately, Australia did enough to win Pool B, perhaps with not quite the same swagger, but their win in their third game against Canada – 31-14 – was impressive.

Elsewhere, France cheered the home crowd with an unbeaten opening day; England looked strong, following their good performance against the Ferns a big win 31-12 in their World Cup rehearsal with Ireland, and a 45-12 triumph over Wales. Canada took runners-up spot in Pool B, helped with a big win over a strangely subdued Russia, while the United States took runners up spot in C.

The best two third place spots went down to the wire. Ireland ended on a -17 points difference and then watched as first Fiji just hung on against Russia to end on -15, and then a Patricia Garcia conversion for Spain v Japan was on target to finish Spain on -16.  As a result Ireland missed the quarter-finals – but in compensation they did lift the Challenge Trophy on the second day.

In the quarters, New Zealand swept on with a 38-0 over Spain, and France dismissed England 48-7 – by a wide margin their biggest ever win against England in a 23-match series that goes back to 2004. The other two quarters were edge of the seat stuff, with both games being won in the last minute, Bianca Farella overturning the United States just after Kristin Thomas looked like she may have won it for them, and then Emilee Cherry rescuing Australia when Fiji seemed on the verge of a famous win.

The Ferns were continued their unstoppable impetus sweeping away Canada in the first semi, before France and Australia met in a hugely exciting game. An Australian would give them the title, but France were looking for a home final – and looked like they were there until Emilee Cherry again came to the rescue, grabbing the ball when Australia were awarded a penalty, and sprinting 70m to score.

And so to the final – and New Zealand, now in magnificent form, raced to a 26-0 lead at the break. After a 46-0 in Langford and coming back with two tries to win in Kitakushu, the Ferns had no scored 84 unanswered points against Australia. The run came to an end with a Pelite try for the new series champions – but the Ferns still laid down a marker for the World Cup with a 31-7 win to take the Paris 7s title.

The 2017/18 World Series was one round less than the previous year, with the loss of a round on the United States for the first time and was also a little overshadowed by the World Cup and Commonwealth Games – England for one saying that they were targeting the latter two rather than the series. It was also a series of two remarkably different halves, with the change coming at the Commonwealth Games.

Australia – champions… just. Up to Sydney they were a revelation, and that “perfect” Sydney win (without conceding a point) made it appear that there would only be one winner. But then the Commonwealth Games came, key injuries began to pile up, the gold was missed, and then it was a case of just hanging in there. In the end they were champions again – but it was so close!

New Zealand began as badly as they have ever done, missing the semi-finals in Dubai, but reached every other final. The turning point was at the Commonwealth Games where they ruined the home team’s party by taking gold – and did not lose a single match thereafter. By the last two tournaments in Langford and Paris they seemed at times an unstoppable runaway train of a team. To win three out of five tournaments and not the series is in itself remarkable.

France were remarkable. They broke all of the rules, switching players between fifteens and sevens, winning the Six Nations and then switching players back to sevens afterwards. But their performances never faltered. It did not seem to matter who was on the field, as long as they were wearing blue they were buoyed up with confidence and played better than any French team has ever played before. A team that used to worry about reaching the quarter-finals became one disappointed if they missed a final.

Canada had another good year overall – apart from the disaster that was Kitakyushu, an aberration that lost them their third place overall and followed closely on missing out on bronze at the Commonwealth Games to England. It was impressive to see how they recovered from those disappointments with two more quarter-finals, and a third place in Paris. Canada remain one of the world’s top teams.

United States remain strong, their win over the Ferns in Dubai showing that on their day they are force to be reckoned with. Inconsistencies, perhaps partly due to experimentation with a home World Cup on the horizon, but four quarter-finals from five, including a semi-final and a final, is an impressive outcome.

Russia were consistent and exciting in the first three tournaments, chose to rest their squad for Langford, bought them back for Paris and then found them oddly off the pace. They will maybe be disappointed to lose the title of the top European team in the series, but again a lot about their performance can be put down to World Cup preparations. In the end, Russia are what we saw in Dubai, Sydney and Kitakyushu.

Spain have had a brilliant series – their best ever with four quarter-finals in five. Relegation has always been a concern in the past, but this year it was dismissed by the mid-point in the series. New young players have been carefully and gradually introduced to play alongside the experienced stars, and the future looks good. Finishing above England will have been another bonus.

England said their targets were elsewhere, had a raft of injuries, and are planning long-term for 2020 – but even so eighth place cannot be what they wanted. They made four quarter-finals but failed to win any of them. It is a concern that England seem to be slipping. As an example, they had never lost to Spain in the World Series before 2017 but have now lost four times in last five matches. England undoubtedly have the raw talent to compete at the top, but the Olympics are only two years away now. There is a lot of catching up to do.

Fiji had a brilliant 2016/17 series but it as if their opponents have found them out, and they are back to the team we knew before the last Olympics. Great potential, occasional flashes, but frustratingly under-performing overall.

Ireland, with two quarter-finals and two Challenge Trophies, produced an overall performance slightly below that of last year (when they also won two Challenge Trophies, but reached four quarter-finals in six tournaments). The sixth place in Langford was their best result in a series since 2013, and wins were recorded over the United States, Canada and Russia, which is encouraging. On the other hand these wins are balanced by several heavy defeats, and the loss to China in Kitakyushu - a rare example of a core team losing to guest opposition.

Japan were never really in the running, and by the end of Sydney only one team was going to be relegated. They are probably still the best team in Asia, and the best outside the series, but the illustrate how big the gap now is between the core teams and everyone else. And the gap is growing.

Guest teams had their moments – China making the quarters in Kitakyushu being the standout – but, as we have seen with Japan, the gulf between them and the top 10 is now a chasm. World Rugby need to do something about this – and soon.