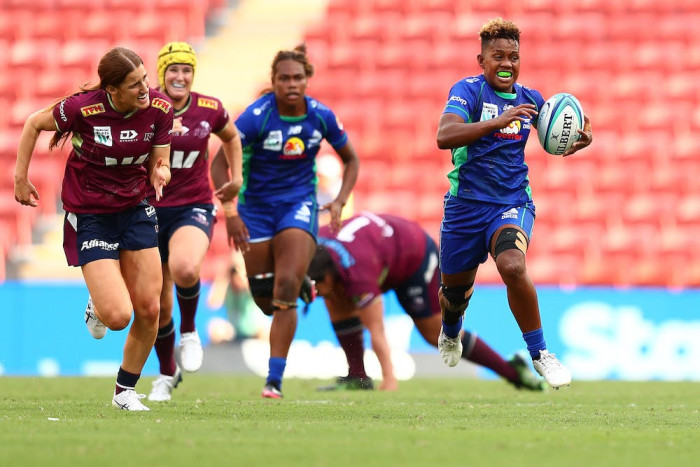 Fiji’s first round 66-5 win Round 1 against Melbourne Rebels was not unexpected as Rebels have never been a major force in Super W. Queensland Reds were expected to be another matter. The Reds normally compete for the title against the Waratahs, so this should have been a real test.

And it was the Reds who got on the board first with an 11th minute try from Ivania Wong, but after that it was all one way with Fiji racking up five tries before the Reds managed a consolation score just before the end.

First Doreen Narokete outfoxed the Reds' defence from close range after five-eighth Merewalesi Rokouono had charged down a kick. Lethal winger Vitalina Naikore scored the first of her two tries to make it 12-5 at the break, before teammate Jade Coates barged over to begin the second half.

Naikore's second was followed by hooker Vika Matarugu's clincher to make it 27 consecutive points for the visitors.

"You give them an extra possession and they kill you," Reds captain Shannon Parry said. "We left a few points out there in the first half and couldn't execute when we got that territory. They're a quality team and they showed that today."

Next up for the Fijians will be Western Force before what looks a mouthwatering clash against the four-time champions Waratahs the week after. The Waratahs remain undefeated in 20 matches since the Super W's began in 2018 – this could be their most serious challenge yet.

Waratahs themselves beat Force 31-14 this weekend after their 31-17 win against Brumbies in Week 1, although the final score flattered a little as they needed two late tries to see claim victory. The match had been tied at 14-14 until the 63rd minute when Georgina Tuipulotu dived over in the right corner to break the deadlock. Prop Bridie O'Gorman then secured the victory with an unlikely but memorable 30-metre runaway try after following through a chip kick from a Waratahs lineout win.

In the final game of the day Brumbies and Rebels tied 17-17,  second disappointing outcome for the Brumbies who would normally be competing for a place in the final but now sit on zero wins from two.

This week they allowed the Rebels to come back from the dead. Leading by seven points with a minute to go the Brumbies gave away a penalty at the breakdown in the final seconds. Georgia Cormick took a tap for the Rebels and Eirenei Nanai eventually broke the Brumbies line to level the scores.