Fiji will prove a threat in Dubai

Melodie Robinson looks back at the Bayley’s Coral Coast Sevens in Fiji, where the local club champions Marist Seahawks upset a full strength Australian team in their Cup semifinal. 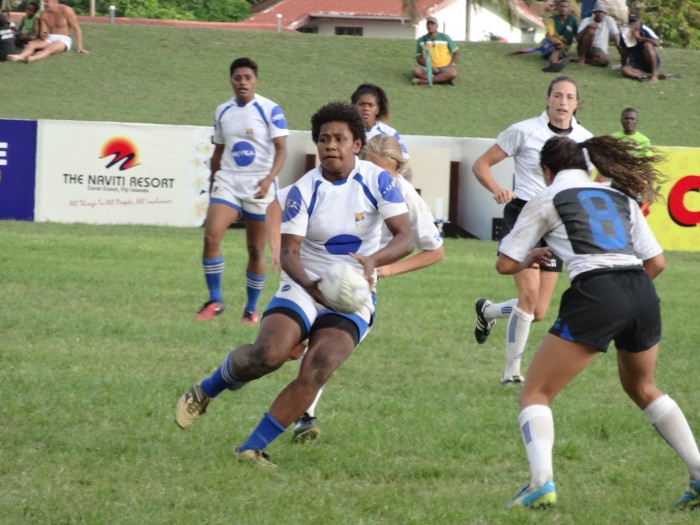 Robinson, a commentator and presenter on Sky Sports in New Zealand, voiced the 2013 Rugby World Cup Sevens and IRB Women’s Sevens World Series, and will contribute regular posts this season for Scrumqueens.com on the women’s game in New Zealand and beyond.

Not one, but two Fiji sides made the final of the Bayley’s Coral Coast Sevens over the weekend in Fiji with the biggest surprise from the local club champions Marist Seahawks, who upset a full strength Australian team in their Cup semifinal.

The national side Fijiana ended up the winners over the Seahawks 31-6, taking the Crest Na Iri Trophy and $10,000 of prize money.

Defending champions Australia were favourites over the first two days of the tournament posting scores of 59-0 over another Australian team, Striders, 50-0 over New Caledonia, 27-7 over Australian development team Tribe and then 56-0 over local team Hinemoana in the quarter-final.

Fijiana were also dominant in their games, 31-0 over Pacific Blues, 36-0 over Sydney Fiji Ranadi, 35-5 over Nivea Marist Seahawks, 26-0 over the Ballymore Sevens Queensland champs Sunnybank, then a close 10 points to five over Tribe in the second semifinal.

But in the first semi, awful ground conditions which reduced the field to a mud pit, meant Australia were unable to utilise their speed out wide in Elia Green and Marist Seahawks played a very physical game at the breakdown to upset the Aussies and take it 14-12. The Seahawks had five girls who have played for Fijiana, three of them were meant to be in the national team but were given permission to play instead for their club side. Fijian halfback Ana-marie Roqica was very good throughout the three days but the whole team was incredibly strong in the contact area and in the end played better to the conditions.

In the final the Fijiana side took off in the second half and this version of the national team looks fitter than the one that ended up in seventh at the rugby world cup especially considering most of them are now in the Fijian rugby academy. Rusila Nagasau scored seven tries, the most for her team, and the former national football rep was central to her team’s success as was Priscilla Siata in the final.

Out of the Australian side, Green out wide, and Rachel Crothers were outstanding. Crothers is new to the game and was the fastest over 40m in the Australian team. She was the highest tryscorer in the comp with eight despite not starting in the semi. She debuted last month at Shanghai.

For the Tribe 7s Aussie coach Tim Walsh would have been happy with Karina Brown’s skill set thoughout the three days and Sarah Webb, a rep basketballer and AFL playing was physically huge at 1.81m and put the biggest hits on throughout the tournie.

The Serevi Selects team won the Plate final over Sunnybank 10-0 with Christy Riggenberg absolutely outstanding in the mud. It was a slightly disappointing three days for the developmental USA side after winning their first three games, they lost to eventual finalists Marist Seahawks 12-21 in the first Cup quarterfinal, but bounced back well for the Plate. Rebekah Siebach showed plenty of speed in her matches and the team looked very well conditioned.

It’ll be interesting to see how Fijiana go at Dubai next weekend, if they can handle the fact they’re playing in front of big crowds, and continue the physical style they’re starting to perfect - expect an upset or two.

They’re on a high having beaten New Zealand in the recent Oceania tournament, and perhaps there’s an argument for a women’s leg of the IRB to be run alongside of the Coral Coast sevens in Fiji considering how well the event went and how many locals turned up to support the teams.