Fiji have won a Pacific Islands U18s festival, played in Auckland in the lead up to the World Cup 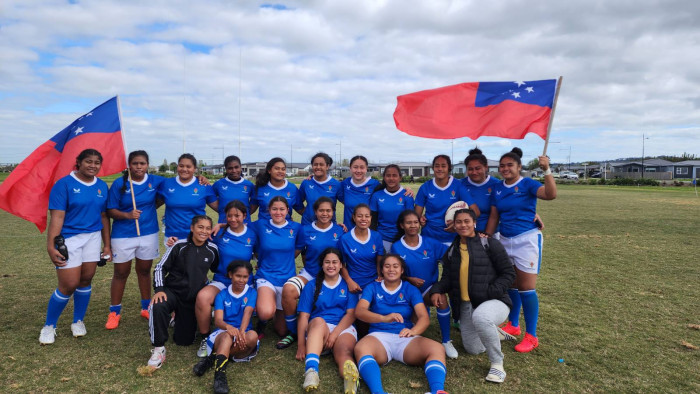 Samoa U18s - runners up in the tournament

Championing Oceania is an initiative, launched in June, that aims to “supercharge women’s rugby” association with the Rugby World Cup.

The programme has been developed by NZ Rugby, with support from the Ministry of Foreign Affairs & Trade (MFAT) and Oceania Rugby. to ensure that the Rugby World Cup has “a tangible and lasting impact on the growth of women’s rugby throughout the Pacific”, “inspiring young women, normalise and encourage female participation in rugby, grow 15-aside rugby among secondary school girls and support aspiring leaders in the women’s game, including players, coaches, officials and administrators throughout the Oceania region. Funding and equipment have been provided to support the programme’s delivery and resourcing in each country.”

“Game Changers” based in both New Zealand and the islands are leading the programme, which was supported by the Trophy Tour before the World Cup began, as well as last week’s tournament.

Full scores from the tournament, which was based around 20 minute games between the teams on the first two days, leading to finals on the third day.

From the results that have been published, it is clear that Samoa and Fiji were the leading teams, with the Samoans beating Fiji 5-0 on day one (Thursday). Fiji gained revenge on Day 2 with a 12-0 win, and also beat the Samoans in Saturday’s final.