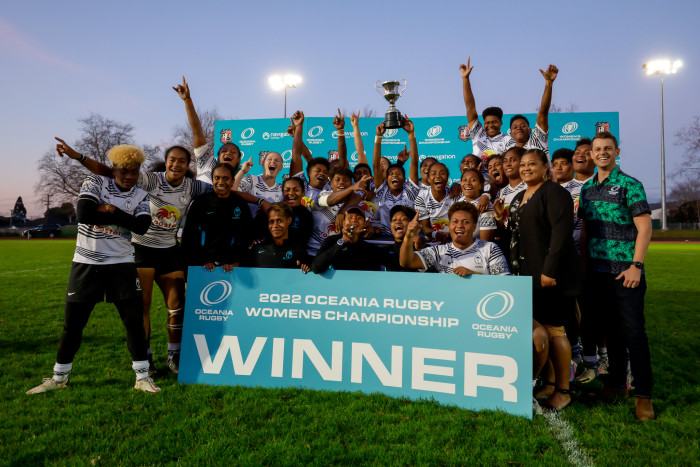 A one-sided game Tonga go ahead after two minutes through Lu’isa Pita. Papua held out for another ten minutes before the floodgates began to open with three tries in five minutes.

Papua fought back briefly with Bibiana Paloa scoring their only try of the tournament after 24 minutes, but then it was business as usual with four more Tongan tries putting them 48-7 at halftime.

Four more tries in the first ten minutes of the second half sent Tonga past 70 points, with the lead extending to 84-7 just before the hour. As players tired and the benches were emoted the scoring slowed a little, but after 76 minutes Tonga passed the 100 mark, with a final try two minutes before the end gave them a 108-7 win.

Fiji and Samoa met in the final game that would decide the title.

The closest game of the tournament by far, it took 15 minutes for scoring began through Fiji’s Raijieli Laqeretabua. Ilisapeci Delaiwau added a second in the 27th minute, but Samoa were being kept in the game by the boot of Cassie Siataga and fiji’s . Her first successful penalty had narrow the score to 5-3 just before Delaiwau’s try, and two more followed as Samoa – despite being down to 14 due to a yellow card – pulled pack to 10-9 as halftime approached. Then a cynical foul by Fiji’s Vani Arei in the final minute of the half gave Samoa a chance to go ahead, Linda Fiafia taking full advantage. Samoa lead 16-10 at the break.

Despite being down to 14 it was Fiji who scored first in the second half through in the 46th minute Akosita Ravato to take a one point lead at 17-16. But Michelle Curry when scored for Samoa ten minute later they regained the lead 21-17, and also again had a player advantage after a second Fijian yellow.

Despite being a player down Fiji again scored and regained the before Siataga levelled the scores at 24-24 with 12 minutes to go. With three minutes to go Wainikiti Vosadrau's penalty goal attempt for Fiji from 40m fell short, but Samoa could not clear and from the final play a great run from Vitalina Mirini allowed her to put her captain Pauaraisa to score the try to win the game for Fiji.